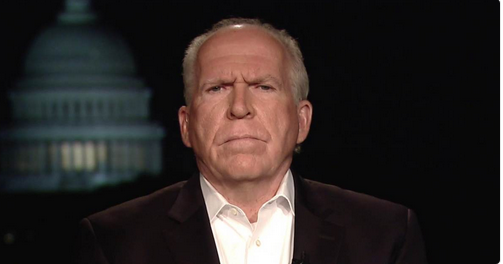 During today’s press briefing, White House press secretary Sarah Sanders did not address the Trump-Omarosa drama. Instead, she took the opportunity to make a statement that the White House is revoking the security clearance of former CIA director John Brennan. The announcement was made today, but the statement, according to CNN White House correspondent Kaitlan Collins, is dated July 26, 2018.

The White House’s reasoning is Brennan has “indulged in erratic conduct,” given “frenzied commentary,” made “a series of unfounded and outrageous allegations, wild outbursts on the internet and television.” Additionally, the White House says Brennan has monetized his official position and told lies.

This is notable from a TV news standpoint because Brennan is an MSNBC/NBC News national security analyst who appears across the news division’s programming.

Below are a few examples of what the White House is probably deeming “wild outbursts on the internet and television,” including a Brennan’s appearance on last night’s broadcast of The Last Word with Lawrence O’Donnell:

It’s astounding how often you fail to live up to minimum standards of decency, civility, & probity. Seems like you will never understand what it means to be president, nor what it takes to be a good, decent, & honest person. So disheartening, so dangerous for our Nation. https://t.co/eI9HaCec1m

Donald Trump’s press conference performance in Helsinki rises to & exceeds the threshold of “high crimes & misdemeanors.” It was nothing short of treasonous. Not only were Trump’s comments imbecilic, he is wholly in the pocket of Putin. Republican Patriots: Where are you???

Clapper is a CNN contributor, and Hayden is a frequent guest on MSNBC’s Morning Joe.