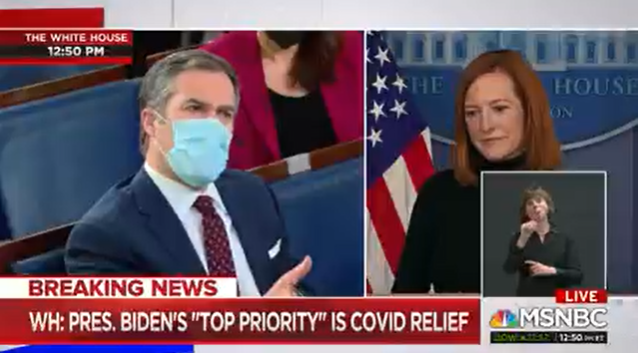 According to Vanity Fair, Ducklo made “derogatory and misogynistic comments” and threatened to “destroy” Palmeri. Palmeri had been inquiring about Ducklo’s relationship with Axios reporter Alexi McCammond. Ducklo reportedly told Palmeri she was “jealous” of his relationship with McCammond.

Alexander reminded Psaki that President Biden said on his first day in office he would fire anyone on his team who disrespects their colleagues.

“He didn’t fire TJ on the spot. He has since resigned,” Alexander said. “Has the president’s position on talking down or disrespecting others changed?”

Psaki responded: “I think the president leads by example, and I try to do the same. On Saturday, when we announced that TJ Ducklo had resigned his position — something we all agreed was the right path forward — I made clear that every day, we’re going to meet the standard set out by the president in treating others with dignity and respect.”

Before joining the Biden campaign, Ducklo, like Alexander, had been an NBC Newser — the chief spokesperson for NBC Nightly News with Lester Holt, to be exact. Alexander is D.C.-based, while Ducklo was based in New York at the time.