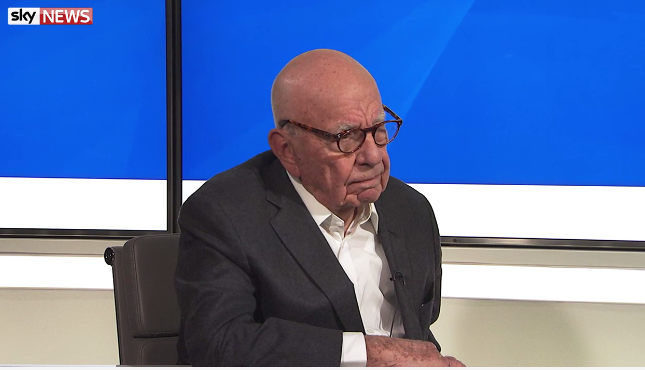 Elsewhere in Rupert Murdoch world, the 21st Century Fox executive chairman made controversial headlines yesterday during an interview with Sky broadcasting, a company Fox has a significant ownership stake in.

The sit-down interview with Sky News’s Ian King primarily focused on yesterday’s mega-deal, but Murdoch was also asked whether he felt the sex scandals that have maimed the network in recent years have hurt the company’s bottom line.

“It’s all nonsense,” he told King. “There was a problem with our chief executive, over the year, isolated incidents.”

Murdoch was of course alluding to the July 2016 departure of former Fox News chief, the late-Roger Ailes.

As soon as we investigated he was out of the place in hours – well three or four days. And there has been nothing else since then. That was largely political because we are conservative. The liberals are going down the drain. NBC is in deep trouble. CBS, their staffs. There are really bad cases and people should be moved aside. There are other things – which probably amount to a bit of flirting.

Murdoch added that he did not believe those allegations had affected investor sentiment towards his businesses.

Fox has been trying to buy full control of Sky for more than a year. In December 2016, 21st Century made a $14 billion offer for the 61 percent of the company it doesn’t already own, and it’s currently being scrutinized by the the U.K.’s Competition and Markets Authority.

Fox said it expected that the full purchase of Sky would be completed by the end of June 2018.

UPDATE: 21CF put out the following statement in light of the boss’s comments:

“Rupert never characterized the sexual harassment matters at FOX News as ‘nonsense.’ Rather, he responded negatively to the suggestion that sexual harassment issues were an obstacle to the Company’s bid for the rest of Sky. Under Rupert’s leadership and with his total support, the Company exited Roger Ailes, compensated numerous women who were mistreated; trained virtually all of its employees; exited its biggest star; and hired a new head of HR. By his actions, Rupert has made it abundantly clear that he understands that there were real problems at FOX News. Rupert values all of the hard-working colleagues at FOX News, and will continue to address these matters to ensure FOX News maintains its commitment to having a work environment based on the values of trust and respect.”