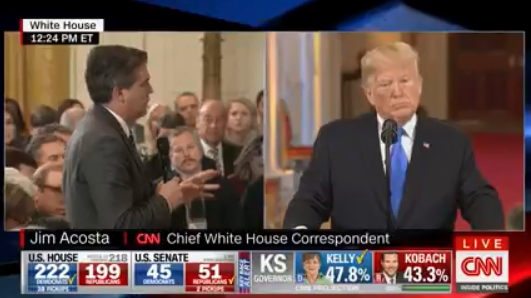 U.S. District Court Judge Timothy Kelly has decided to take an additional day before making a ruling on CNN’s motion for a temporary restraining order against the administration’s ban on Jim Acosta‘s access to the White House.

The decision, which was supposed to be handed down today at 3 p.m. ET, has been delayed until tomorrow (Friday) at 10 a.m. ET.

It’s unknown why exactly Judge Kelly needs another day, but what we do know is that the ban of CNN’s chief White House correspondent from entering the grounds of 1600 Pennsylvania Avenue continues.

Trump administration lawyers argued during Wednesday’s hearing that the president could bar “all reporters” from the White House complex for any reason he sees fit.

“If the president wants to exclude all reporters from the White House grounds, he has the authority to do that,” Deputy assistant attorney general James Burnham said during the hearing. “There’s no First Amendment right.”

It remains to be seen if Judge Kelly, a Trump appointee, agrees and turns down CNN’s request.

CNN and Acosta have garnered support for its lawsuit against the administration from a significant number of news outlets, many of which, including Fox News Channel, have filed friend-of-the-court briefs on CNN’s behalf.

In case you need a timeline: The hostility between Trump and Acosta at the presser took place eight days ago, Wednesday, Nov. 7. Sarah Sanders issued a tweet hours later stating that the White House was “suspending the hard pass of the reporter involved until further notice.” CNN’s lawsuit in response to the ban was filed two days ago, Tuesday, Nov. 13.