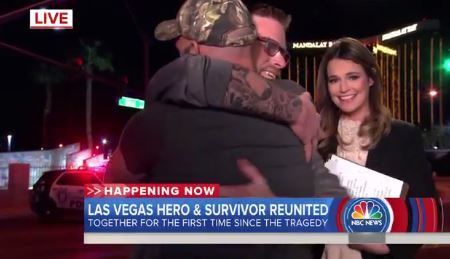 CBS’s Norah O’Donnell and NBC’s Savannah Guthrie are among the TV news anchors in Las Vegas today covering the massacre at the Route 91 Harvest Festival Sunday night. Their producers and bookers have been working overtime finding just the right stories to tell, the stories of selfless heroism amid the unfathomable carnage.

On NBC, the Today show team arranged a reunion of a man who was shot, Tom McIntosh, and another man who saved him, James Lawson, who has been an Army reservist for more than 10 years. He also has his EMT certification. “I never did anything with it, until the other night,” Lawson told Guthrie.

On CBS This Morning, O’Donnell reported the story of Taylor Winston, a Marine veteran who drove more than two dozen victims to the hospital.

On ABC’s Good Morning America, George Stephanopoulos talked with twin sisters, both of whom were shot. One was still hospitalized, the other is out of the hospital. GMA also played a message from a firefighter who saved them. “He was an amazing guy. He could have not acknowledged me, but he is a very strong man and his family should be very proud of what he’s doing.”