NEXT:Tucker Carlson: 'How Shocked Are We That 17 Year Olds With Rifles Decided They Had to Maintain Order When No One Else Would?'
PREVIOUS:CBS This Morning Co-Anchor Tony Dokoupil Receives Scary Wake-up Call for Hurricane Laura Coverage This Morning 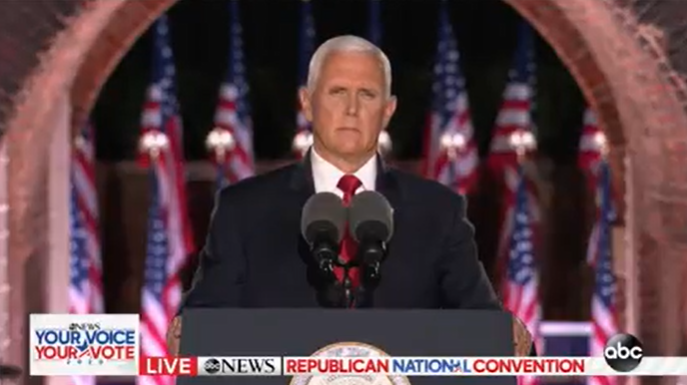 It has been a heck of a news day. Category 4 Hurricane Laura is heading toward Cajun Country, the NBA is postponing its playoffs amid the Milwaukee Bucks decision to boycott their playoff game following the police shooting of Jacob Blake in the team’s home state of Wisconsin, and a 17-year-old named Kyle  Rittenhouse was arrested and charged with first-degree intentional homicide after allegedly murdering two protesters during racial unrest over the police murder of Blake in Kenosha, Wis.

Oh, and then there’s the third of the 2020 Republican National Convention, with Vice President Mike Pence giving the headline speech this evening.

Would any of the aforementioned events be addressed at tonight’s event? Particularly Kenosha? Seems like a must.

“I think they have to talk about it, the question is how they talk about it,” CBS News 60 Minutes correspondent John Dickerson said during studio coverage. “Let’s raise the stakes, the president has been showing up every night, the president could talk about it. This is the kind of moment certain presidents in our past have longed for because a part of the president’s job is to step in and calm the passions of the country. That’s why the office was designed, in part. Also, sew together a country that is ripping a part.”

Dickerson later added: “While this week has had its moments, it is worth remembering these two gentlemen are in charge of the response to the coronavirus that has killed 180,000 Americans. That is the reality that will be happening on Election Day.”

Tonight’s theme is America, Land of Heroes. Rabbi Aryeh Spero gave the opening prayer. He is the author of a book called Push Back: Reclaiming the American Spirit.

South Dakota Gov. Kristi Noem gave a rather dark address, saying that American cities are “being overrun by violent mobs” and people “are left to fend for themselves …” blaming local Democratic leaders for these issues.

Then, we heard from a logger from Minnesota, which the Trump campaign feels has become a swing state. He accused environmentalists of killing the forests by failing to “manage” the forests to prepare for fires.

A significant portion of the 9 p.m. ET hour focused on women’s issues.

Eric Trump‘s wife, Lara Trump, narrated a video focused on the women’s suffrage movement. During her remarks, Trump focused on leaders, including Susan B. Anthony, whom the president pardoned last week. Ironically, Anthony never wanted to be pardoned because she felt that she did nothing wrong.

There has also been some discussion over the first 35 minutes about school choice.

Later, President Trump’s press secretary, Kayleigh McEnany, did what the children usually do at these vents—providing a softer side of the president, a father figure of sorts. She spoke about the president’s support of her through a breast cancer diagnosis: “In my family, eight women alone were diagnosed with breast cancer, several in their 20s. I faced the same prospect.”

Vice President Pence’s wife, second lady Karen Pence, then gave taped remarks from the Washington, D.C., Mellon Auditorium. She spoke about herself, her husband and the armed forces. Her son is a Marine.

Proud of my wonderful wife, Second Lady @KarenPence for delivering a message of hope and strength to the American people tonight! We’re ready for four more years! #RNC2020 pic.twitter.com/5gmZYYW89g

“President Trump helped me shatter a barrier in politics,” said Kellyanne Conway, a longtime counselor to the president who is leaving the administration at the end of the month.

Conway was Trump’s campaign manager in 2016, and is a significant reason why he is where he is today.

Then, there was sister Deirdre Byrne. She is a nun, medical doctor and a retired army colonel.

“Because of his courage and conviction, President Trump has earned the support of America’s pro-life community,” she said of Trump.

Greg Gutfeld is a fan:

can we admit that this nun is a bad-ass. and i want to her to be my best friend.

Next, former Notre Dame (and South Carolina) football coach Lou Holtz appeared on stage and said that protesters “don’t have pride in our country … [or] in themselves.”

He took a hard jab at Biden (and many other Catholics across the country) by saying that some abortion rights supporters are “Catholic in name only.”

Sen. Joni Ernst of Iowa falsely accused the media of not covering Derecho, until Trump visited Cedar Rapids on Aug. 18. Iowa Gov. Kim Reynolds did this last night as well.

CNN and MSNBC have been going back and forth between RNC video segments and studio coverage, more frequently than on previous nights, it seems. They’re discussing proceedings at hand, but CNN, in particular, is cutting in for coverage of Hurricane Laura. Fox News has stuck with live coverage of RNC video far more than previous evenings. At least it seems that way. The president took a shot at the network earlier in the week for what he felt was insufficient coverage of RNC video on opening night. (Granted, FNC still set cable news convention ratings records.)

Former NFL player Jack Brewer also spoke at the event. Earlier this year at the White House, he called Trump “the first Black president.” He also is reportedly facing charges of  insider trading from the SEC.

CNN reported just before the 10 p.m. ET hour that vp Pence would indeed address the events in Kenosha.

The more black men speak at the RNC, the more sullen the liberal media seem.

CNN broke in with another Hurricane Laura update at around 10:20 p.m. ET.

Rep. Lee Zeldin spoke about the Covid-19 pandemic in his taped message. However, aside from the New York congressman, there’s been no discussion of the pandemic at all, not to mention all of the mass protests in response to police shootings, a 17-year-old allegedly shooting people protesting racial unrest, wildfires in California and a Category 4 hurricane about to strike Southwest Louisiana.

Note: All of these speeches were taped in advance, except for the vice president’s.

Every speech tonight – with the exception of Mike Pence’s – is pre-taped. Every one.

Pence then spoke in front of roughly 100 people at Fort McHenry in Baltimore. The video introduction was nicely done, showing plenty of photos of the vice president as a kid and with family in Indiana.

He was speaking at an outdoor venue, but no one in the seats was socially distanced or wearing a mask.

President Trump and First Lady Melania Trump are walking around and interacting with several audience members without masks right now. It’s not clear if a mixture were tested beforehand — like last night — but we spoke with at least four attendees who weren’t.

The vp said that instead of “living in a time of darkness,” a mood he claimed Joe Biden and the Democrats provided at the DNC, we’re living in a time of American greatness. Pence mentions Hurricane Laura and says that all federal resources will be available for the people affected.

He became the second speaker to make reference to the pandemic. “And then the coronavirus struck from China,” he claimed.

Pence also made a bold promise about a vaccine by the end of the year.

.@VP tells RNC they are on track to have “the world’s 1st safe effective coronavirus vaccine by the end of this year.” Well experts hope so but say can’t know it until the tests prove it – and worry the White House will push a vaccine out before its proved safe & effective

The vp says he supports the rights of peaceful protesters, but emphasizes his opposition to violence, to ripping down statues. He is the first person to bring up Kenosha, and adds Minneapolis and Portland to the mix, as cities he feels have problems with violence.

He does not say the name Jacob Blake.

“We will have law and order on the streets of America. … You won’t be safe in Joe Biden’s America,” Pence said, one of the most intense lines of his live address.

On the other side of the aisle:

This moment demands moral leadership. And these players answered by standing up, speaking out, and using their platform for good.

Now is not the time for silence. https://t.co/hF3dIb7Hde

And back to the vp:

The vice president’s speech seemed lengthy. Was it? C-SPAN to the rescue:

It was 36 1/2 minutes, which is on par with Paul Ryan’s 2012 convention speech and far longer than Sen. Kamala Harris‘, whose speech was only 18 1/2 minutes (to be fair, she had a long-winded President Obama as her lead-in). Sarah Palin‘s 2008 speech and Joe Biden’s 2012 speech tie for the longest vp convention speech ever (38 minutes).

After Pence’s lengthy, but quite solid speech, President Trump and the first lady made a surprise appearance at Fort McHenry … and the crowd started chanting “four more years.” 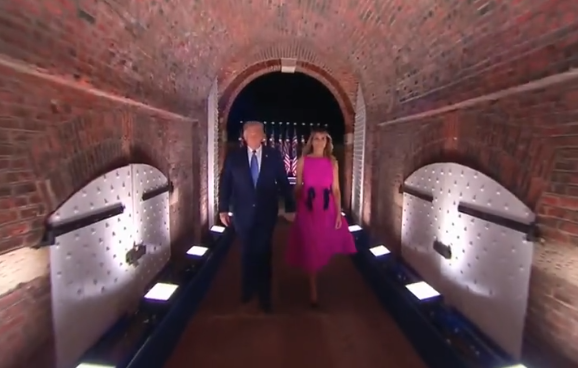 .@TraceAdkins is the only celebrity at the RNC and he sang the National Anthem.

And with this, good night:

Today might be the longest day of 2020 so far and that’s really saying something.