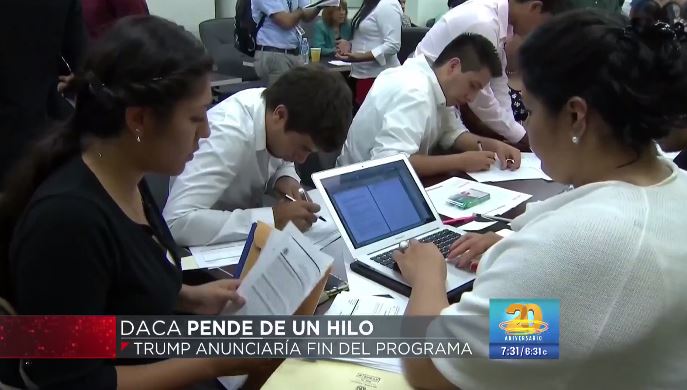 The Trump Administration’s decision to do away with DACA, or Deferred Action for Childhood Arrivals, has drawn condemnation from the nation’s two largest Spanish-language networks, Univision and Telemundo.

“I am disappointed, to say the least,” writes Univision CEO Randy Falco in a statement, whose company employs some of the so-called dreamers. “We are disheartened by the decision,” Telemundo adds in its statement.

There are as many as 800,000 dreamers in the U.S. If all were to be removed from the workforce, there would be an estimated $280 to $460 billion reduction in economic growth.

“Today’s announcement should not be seen by those who espouse anti-immigrant sentiments as a ‘win’ or a way to send hundreds of thousands of immigrants back into the shadows,” Falco writes, adding, “It is time to permanently protect the DACA program.”

I am disappointed, to say the least, in today’s announcement by the Administration to end the Deferred Action for Childhood Arrivals (DACA) program in six months.

The U.S. government is revoking the ability of roughly 800,000 DREAMers to continue to work and contribute in countless ways to the United States – the only home they have ever known. This is a failure to live up to a commitment already made to DREAMers and is contrary to America’s values and traditions.

As parents are sending their kids back to college, thousands of DREAMer students pursuing college degrees are trying to focus on learning, not knowing if they will be able to complete their studies. As the government sends more troops to Afghanistan, DREAMer soldiers will be deployed to fight on the front lines, knowing that the freedoms they are protecting may not be afforded to them when they return home. As employers work to build the U.S. economy, DREAMer employees who are paying taxes and contributing to the future of our nation face uncertainty of their own economic futures.

Let’s be very clear – DREAMers are our students, soldiers, first responders, coworkers, neighbors, and friends. Here at UCI we will continue to stand by them, including those talented DREAMers working at our company to advance our mission of entertaining, informing, and empowering the Hispanic community and the rising American mainstream we serve. Their stories are unmistakably American. They deserve better than this.

That is why today’s announcement should not be seen by those who espouse anti-immigrant sentiments as a “win” or a way to send hundreds of thousands of immigrants back into the shadows. We must not allow this move to foster ethnic discrimination in our neighborhoods, schools and workplaces.

Instead, this is a call to Congress to fix this mess before the United States experiences the estimated $280 to $460 billion reduction in economic growth from the loss of DREAMers in our workforce, as estimated by some studies. This is a call for Congress to work in a bipartisan fashion to enact meaningful immigration reform that takes into account those who were brought here as children and are raising their hands to learn, to serve, and to work should be allowed to legally remain in the U.S.

The American values of hard work and commitment have led millions of immigrants to the United States in search of opportunity. These values are embodied by DREAMers. It is time to permanently protect the DACA program.

And here is NBCU-owned Telemundo’s statement:

“Telemundo stands with the 800,000 Dreamers who are integral to the economy, culture and spirit of our nation. We are disheartened by the decision to end the Deferred Action for Childhood Arrivals (DACA) program. In addition to the human impact of this decision, repealing DACA will result in the loss of thousands of jobs in the United States and billions of dollars in economic growth over the next decade. We urge Congress to act swiftly to preserve the rights of these valuable members of our community. All of our elected representatives should be held accountable toward this end.”