NEXT:Andrea Mitchell and Her Producer Michelle Perry on Why Their 17-Year Partnership Has Proven So Successful
PREVIOUS:Bloomberg Global TV and Radio Chief Al Mayers Is Retiring 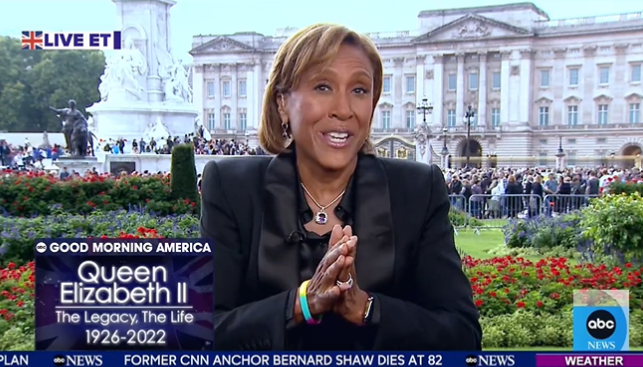 The passing of Queen Elizabeth II at the age of 96 has stunned the world. Many U.S. television news personalities, based abroad and stateside alike, are currently in the U.K. to cover the event.

CNN Special Report: A Queen for the Ages: Elizabeth II premiered Thursday night on CNN/U.S. and CNN International. It was reported by Max Foster.

Fox News’ Martha MacCallum, anchor and executive editor of The Story with Martha MacCallum, is leading the network’s coverage live from London on Friday. Live reporting is being provided from London across FNC’s daytime and primetime programming throughout the week and weekend by FNC correspondents Greg Palkot, Amy Kellogg, Jonathan Hunt and Alex Hogan.

CBS Evening News anchor Norah O’Donnell is leading CBS’ coverage and is broadcasting from London today. CBS News will feature coverage in partnership with the BBC.

Additionally, Sunday on CBS Sunday Morning, Jane Pauley will anchor a special 90-minute edition focusing on the life and legacy of Queen Elizabeth II, featuring the latest news and reports from CBS News journalists around the globe.

Muir will anchor a special edition of World News Tonight from London Friday evening. He will also anchor a two-hour, live primetime special, reporting on the tributes with Robach, Roberts, Longman, Jobson, Murphy and Anderson—and a look ahead to the celebration of life for Queen Elizabeth II. The special airs tonight at 9 p.m. ET on ABC and streams next day on Hulu.

As part of the season premiere, GMA3 will broadcast live from London, with co-anchors T.J. Holmes and Robach covering the events following the queen’s passing and King Charles III’s ascension to the throne.

Nightline will also feature coverage of the queen’s celebration of life with co-anchor Juju Chang live from London.

A special edition of This Week with George Stephanopoulos will air Sunday, Sept. 11, with co-anchor and chief global affairs correspondent Martha Raddatz anchoring the program from London.

ABC News Live will have coverage over the next 10 days with anchors Linsey Davis, Kyra Phillips and Diane Macedo live from London beginning today. The 24/7 streaming news channel will have a full weekend of programming to honor the queen’s life and capture the global event.

At NBC, Savannah Guthrie anchored Today live from London on Friday and will do so again from London on Monday. The special edition of Today featured on-the-ground reporting from NBC News’ Keir Simmons, Richard Engel, Kelly Cobiella and Molly Hunter.

On MSNBC, Katy Tur and Chris Jansing are both anchoring their programs from the Canada Gate at Buckingham Palace. Richard Engel’s team is also preparing an hour-long special that looks at the Queen’s history, from the turmoil she recently went through, to her passing and where the monarchy stands following her passing. The air date and time for that special is TBA.

CNBC’s The News with Shepard Smith correspondent Valerie Castro will be in London, starting Monday, to cover the event for the newscast.

On the digital front, NBC News Now continues to carry the latest breaking news out of England, carrying the Sky News feed as well as any special coverage. NBCNews.com is carrying a robust live blog with real time updates following the death of Queen Elizabeth II. NBCNews.com will cover all of the latest breaking news and in-depth looks at the transition in power to King Charles III.