Two women who had previously settled with former Fox News Channel host Bill O’Reilly have joined a defamation suit against the host and Fox News.

Andrea Mackris, who worked on The O’Reilly Factor in the early 2000’s, and Rebecca Gomez Diamond, a former FBN host, have joined former producer Rachel Witlieb Bernstein claiming O’Reilly has defamed them by talking about prior settlements with them.

Their lawsuit claims the three women are “members of a small identifiable group” subjecting them to defamation by O’Reilly as he explained his departure from FNC in press accounts and on his digital program. 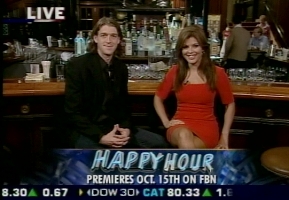 Witlieb Bernstein first sued O’Reilly earlier this month. The former FNC producer entered into a settlement with Fox News and O’Reilly in 2002.

Gomez Diamond, who hosted Happy Hour (at left) on FBN, complained about O’Reilly’s behavior through her personal lawyer. Fox News chose not to renew her contract and settled her claim in 2011.

Mackris’ story of harassment by O’Reilly goes back more than a decade. In 2004, O’Reilly sued Mackris alleging extortion. The same day, Mackris sued O’Reilly for sexual harassment. The suit was settled with Mackris reportedly being paid $9 million.

In today’s suit, lawyers claim all three women were not the sources of stories about the settlements and that, despite O’Reilly’s assertion to the contrary, the women did file complaints with Fox executives.

“The latest filing has absolutely no merit in court,” said O’Reilly’s attorney Fredric Nemman. “Adding more plaintiffs does not cure the deficiencies in Bernstein’s complaint. The plaintiffs have drawn more attention to themselves than Mr. O’Reilly ever did.”

Newman says O’Reilly plans to fight: “Mr. O’Reilly never mentioned any of the plaintiffs, but now he has no choice by to litigate fully and aggressively,” he said.

The suit, attached below, also alleges breach of contract and breach of covenant of good faith and fair dealing. The women are suing for reputational, economic and punitive damages as well as lawyers fees.

Defamation Suit by TVNewser on Scribd