NEXT:Rachel Maddow Has a Warning for Other TV Newsers
PREVIOUS:Keir Simmons is Having Quite an Intense 24 Hours in Hamburg 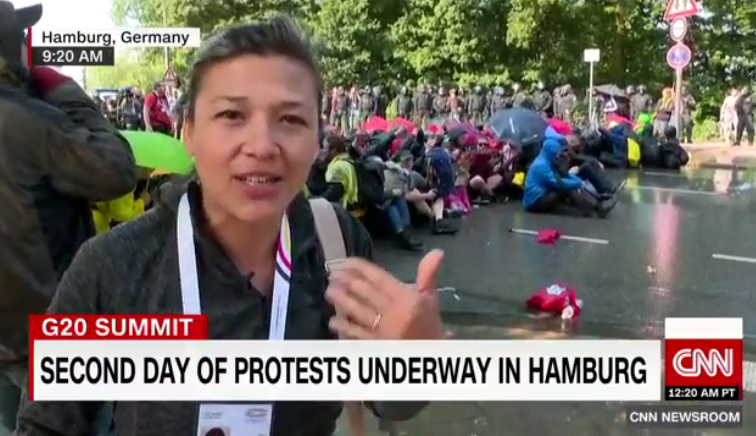 The first public encounter between Russian leader Vladimir Putin and U.S. president Donald Trump at the G20 Summit is perhaps the top story of the day, but the protests outside of the summit are having a significant impact on the event, one which brings together leaders of the world’s top 20 economies this weekend to discuss a variety of issues of “global significance.” The G20 group accounts for around 85 percent of the world’s GDP and two-thirds of its population.

Protesters and police have clashed in Hamburg, Germany, site of the summit, over the past 24 hours. The protesters (reportedly 12,000 of them) are part of an organized, anti-capitalism event called “Welcome to Hell.”

Protesters have burned several vehicles and set fire to trash hauling bins, Columns of smoke could reportedly be seen rising over the city of Hamburg early this morning. Taxi drivers were avoiding the city center, some in protest, others to protect their vehicles. Police have fired water cannons at groups of protesters, and as of this morning, around 160 officers have been hurt by protesters who have thrown bottles at them, say local police.

Even first lady Melania Trump, had to cancel her public schedule on Friday because local police would not allow her to leave the guesthouse where she and POTUS are staying due to security concerns.

A number of TV newsers have been on the scene documenting what they’re seeing.

Here’s extraordinary footage and reporting from Vice News at around 1 p.m. ET:

Just came across thousands of G20 protesters mobilizing for march across Hamburg pic.twitter.com/gm4dJxBHGS

This is NBC News correspondent Keir Simmons and his production team. Simmons, who is based in London, has reported from the ground for MSNBC and NBC Nightly News yesterday and continues to report today.

.@KeirSimmons reporting live on @MSNBC from near a protest barricade at the G20 in Hamburg. pic.twitter.com/MY9lpB2cZV

German police chasing groups of protesters through streets of Hamburg. We just ran with one police unit that lost their target. Chaos. #g20

Simmons also had some choice words for the president’s remarks about the press yesterday:

This morning I heard President Trump criticise the media. This afternoon my team swallowed tear gas to report the story of today’s protests.

CNN International digital news producer Kara Fox was on the scene at the Welcome to Hell protest in Hamburg yesterday and posted some interesting video:

Protestors halted to a stop by riot police in central Hamburg during the planned demonstration “Welcome to Hell” #G20 pic.twitter.com/3kBWT4cuYg

G20 protests in Hamburg have turned into “a cat and mouse game between police and protesters,” says @atikaCNN https://t.co/dU9ltr5Oxg pic.twitter.com/U8zVF2rqLp

This is a rather stunning account from Heavy.com journalist Marcus DiPaola:

Luckily he had some assistance from a certain mainstream U.S. news outlet: