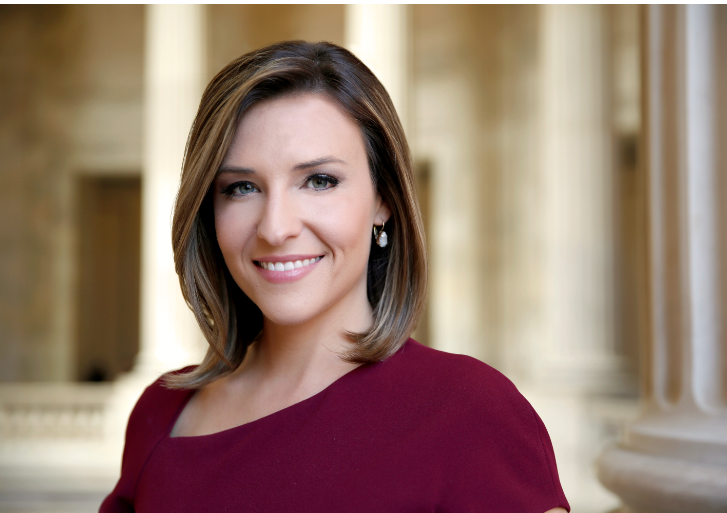 In the next installment of our bimonthly TVNewser Notebook series, we’re kicking off the month of August by featuring ABC News senior congressional correspondent Mary Bruce.

An ABC News lifer, she has been with the network since 2006 and has had stints with ABC News Radio as well as White House producer covering President Obama’s 2012 reelection. And she’s taken one for the team along the way. In 2010, she was injured in a car accident along with ABC News correspondent Abbie Boudreau as the two were on their way to a story in Virginia.

We caught up with Bruce late last month, and here’s what she told us:

TVNewser: Provide us with an interesting anecdote from the first presidential election you covered.

Bruce: I got my first “break” when covering the 2008 inauguration. I was a producer at the time, and when the correspondent couldn’t make it through security, they threw me on to talk politics with Sam Donaldson. It was terrifying but also exciting and made me realize I wanted to change course in my career. It was also super embarrassing. It was absolutely freezing out and I was pretty much dressed like the Michelin Man.

It appears that DNC and RNC seem to be going with largely “virtual” conventions this year. As someone who covered the 2012 and 2016 conventions for ABC News, what do you think is the best solution?

It’s hard to imagine that we are looking at a campaign cycle without conventions as we know them. No convention floor packed with delegates or iconic balloon drop (can you do that over Zoom?). Like most political junkies, I love conventions. But this moment is forcing us all to make impossibly difficult decisions. The conventional convention is just another thing that unfortunately has to succumb to this insane year.

Is there anything you’ve learned from your previous presidential election coverage that you’ve been taking into account as you cover this one?

We certainly learned last cycle that elections are wildly unpredictable and that is proving to be oh so true this time around, too. The story changes so rapidly, and at times it can be hard to cut through the noise. I think the most important lesson is to just stay laser focused on the task at hand—holding candidates accountable and informing the American people as they make this incredibly important choice.

The speed and pace at which we operate will never be the same. The entire news cycle often changes in just 140 characters, or less. We also have far more platforms to file on and more frequently (even before the pandemic, slow days spent riding the campaign bus felt like a thing of the distant past). But social media also allows us to interact with our audience and viewers in a way that I think is incredibly valuable for journalists, now more than ever, as we try to interact virtually with voters and get a sense of what matters most to them.

This election season in particular, I am missing my dear colleague Cokie Roberts, who passed away last fall. She covered 22 national conventions, a record I believe (can you imagine?), and taught me and scores of other journalists the art of covering a campaign. I would love to know what she thinks of this incredible moment we find ourselves in now. I’m sure she would have some choice words.

What’s the best meal/restaurant you’ve been to during past campaign coverage?

I don’t care what you say, the Iowa State Fair is always the best food of the campaign. I dream of Bauder’s peppermint ice cream bars.