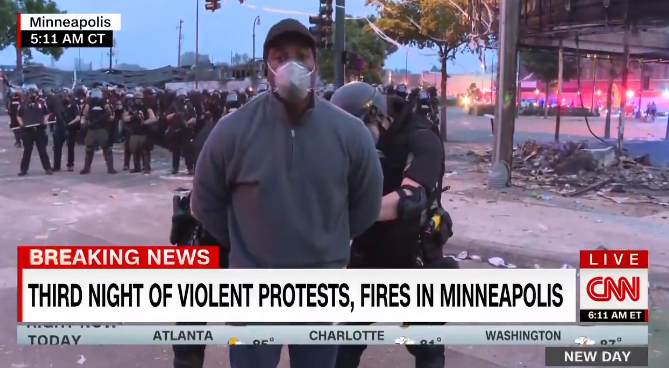 American journalists aren’t supposed to be arrested in their own country while doing their jobs. But that’s what happened to CNN correspondent Omar Jimenez early this morning while he was reporting on the civil unrest in Minneapolis.

Jimenez was filing a report for CNN New Day when suddenly police cuffed him and took him to a precinct. You could hear people off-camera saying he was with CNN. Jimenez, who flashed his media credentials, even offered to move. This happened on live television.

He was arrested anyway.

Producer Bill Kirkos and photojournalist Leonel Mendez were also part of the CNN crew who were arrested, detained and later released.

TV newsers reacted to Jimenez’s arrest, and expressed support for their industry colleague.

Never in my 20 years in Journalism did I think I’d see this. @OmarJimenez doesn’t want the story today to be about him — but let us never forget this moment. Let’s also be mindful of those who’ve been arrested *not* on live TV and weren’t as fortunate to be released so fast. #CNN https://t.co/aVtHFFUdCk

Very impressed by your poise and professionalism, @OmarJimenez. Glad to see you back out reporting. https://t.co/m9BMVvmsW2

.@OmarJimenez is being praised for having poise & he is very worthy of that praise.

But, did he really have a choice? Do most black folks have a choice in moments like that? Is it safe to voice even justified concern when authority figures have decided you are a problem?

We condemn the arrest and detention of a crew of @CNN journalists who were simply doing their jobs in a tough situation on the ground in Minneapolis. This is a time when the work of journalists continues to be necessary to inform and educate the public.

Hard to fathom a reporter being more professional than @OmarJimenez in this moment while being arrested for doing his job on live TV. Unimaginable grace and poise. https://t.co/OFztCJJX0S

The arrest of a @CNN crew in Minneapolis this morning was absolutely uncalled for and unacceptable.

.@OmarJimenez is the consummate professional and all of us at @CNN are incredibly proud to work with him. https://t.co/v1pCz1K2KV

.@OmarJimenez, you and your crew showed incredible stoicism and professionalism throughout this all. So glad to see you back. Now the world can continue to watch you reporting on such an incredibly important and painful story. https://t.co/Y7EHJAM3ex

Nonsense. @OmarJimenez was peaceful, respectful, and willing to do whatever the officers asked of him. Wasn’t given the chance. This is why live television is so important. pic.twitter.com/85NkQQXcpS

Freedom of the press is a fundamental human right.

Arresting journalists for doing their jobs is NOT what happens in a democracy.

Glad @OmarJimenez and his @CNN crew were rightfully released this AM. https://t.co/1lYVe9Mpfv

They were just doing their job — and should have been protected by the First Amendment. @OmarJimenez, producer Bill Kirkos & cameraman Leonel Mendez were arrested this morning by Minnesota State Patrol while reporting live on @cnn. pic.twitter.com/o3WniLsg8D

.@CBSNews stands in support of all journalists – now more than ever our work is vital to the country. No journalist should be detained just for doing their job.https://t.co/5rGEGTmV8w

Good. This should never have happened. Period. https://t.co/D8fskI9KmV

Police arrest CNN’s @OmarJimenez and his crew as they report live from Minneapolis.

This is an unacceptable attack on the free press and a violation of the 1st amendment.

The CNN crew were live on the air, he was holding a microphone @OmarJimenez identified himself as a CNN journalist and his credentials were prominently on display. https://t.co/YtKwTRToSl

Damn proud of Omar Jimenez of CNN and the professionalism he and his crew displayed under absurd and unnecessary pressure in Minnesota this morning. Feels increasingly and frighteningly like the 1960s in the Jim Crow south. Are water hoses, dogs and rope next?

Should have never happened. Outrageous. https://t.co/8LiHQchbgJ

Llenas’ employer, Fox News, also weighed in via statement: “Fox News Channel has always supported the First Amendment and this instance is no different. We denounce the detainment of the CNN crew and stand with them in protecting the right to report without fear or favor.”