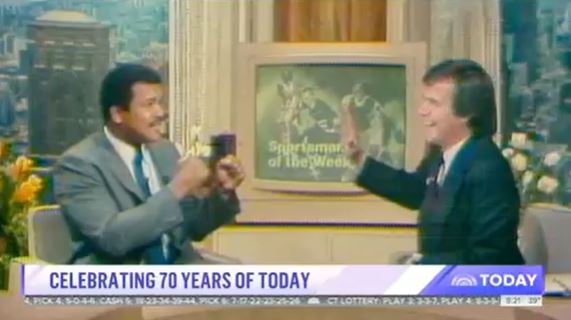 In case you missed our story from yesterday (or haven’t tuned into the broadcast), NBC’s Today premiered on Jan. 14, 1952 and the show is presenting its 70th anniversary celebration telecast as I write this.

“For 70 years, people have tuned in; and the people who brought them that news will have changed, but the mission hasn’t: to find out that the world is still there, and to get them ready for their day,” said Al Roker.

You know the current co-hosts, but a myriad of NBC Newsers (and non-NBC News folks) gave a shout-out to the show’s 70th anniversary and shared their memories from the broadcast via social media.

We’ll continue to update this item throughout the day.

I’m proud to have spent 12 of those 70 years co-hosting the weekend editions of @TODAYshow Happy Anniversary! pic.twitter.com/l8SvLpKrow

Happy 70th birthday to NBC’s @TODAYshow! Proud to have been a part of that amazing morning show family. pic.twitter.com/pqMtdfxyGq

Happy 70th birthday @TODAYshow !!!
It’s been joy and privilege to be along for the ride for 28 of those years. Good wishes to all our viewers, colleagues and friends who make this program a special part of television history. pic.twitter.com/7EXTwLPfId

Congrats! Amazing 70 years of News and Entertainment. It always feels special when I walk into the Today Show studio. https://t.co/wPNBMQzbu1

You know, @dateline_keith is right, @TODAYshow. 70 looks great on you!
Congratulations and Happy Anniversary 🎉 #TODAYat70
🧡💙 Your friends at #Dateline pic.twitter.com/HJ1oHjTKeo

Even the chairwoman of the FCC also shared her thoughts about the broadcast and its milestone:

In a world where so many of us get news and entertainment anytime we want on whatever screen handy, it is hard to overstate how new and different the introduction of morning television news was when the TODAY show began 70 years ago today.