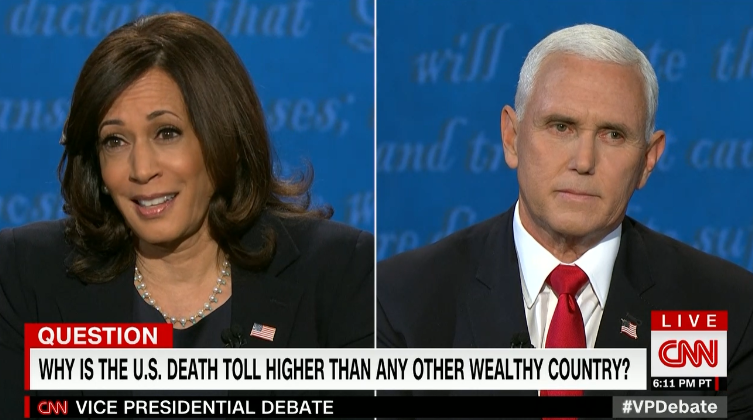 Tonight, vice president Mike Pence and vice presidential candidate Kamala Harris face off for the only vp debate of the 2020 election cycle, sanctioned by the Commission on Presidential Debates. The event takes place at the University of Utah in Salt Lake City, with USA Today Washington bureau chief Susan Page serving as moderator.

This debate is noticeably different than previous debates. For one, TV newsers probably aren’t going to be referring to this debate afterwards as “the worst debate I have ever seen.” Secondly, the candidates will be seated and separated by plexiglass in light of the coronavirus having spread throughout the White House in recent days.

The vice president has tested negative as recently as this morning, but the Harris campaign doesn’t want to take any chances.

The most recent vp debate (Pence versus Sen. Tim Kaine on Oct. 4, 2016) hauled in 37.2 million viewers. and was moderated by CBSN’s Elaine Quijano. Will tonight’s debate exceed that? Remains to be seen.

If you’re not sure where or how to watch tonight’s event, we’ve got it all laid out for you …

Here’s what the previous debate moderator said he was looking forward to tonight:

At least one TV newser feels this vp debate is more significant than those of the recent past:

Ordinarily, these veep debates mean very little. But tonight is different. Tonight, the sitting president has COVID and his opponent will be 78 if elected. Tonight, Kamala Harris and Mike Pence are auditioning for a job one of them very well may have. Watch closely. #Debates2020

Apparently Cupp isn’t the only person to feel this way:

Remember Pence’s number one goal tonight..to be the nominee in 2024.

A couple of thoughts going into tonight.

1. You don’t serve in Congress, become Governor and VPOTUS, without being a good debater/communicator. Mike Pence is very good at this.

2. Kamala Harris will not only have to beat Pence but also age old stereotypes of black women

3. Remember no one has ever seen what we are going to see tonight. The media will be reductive in their coverage, resulting from newsroom’s lack of diversity.

4. I’ve tried to debate with black women throughout my lifetime and haven’t won one yet. Pence is about to learn.

And now we’re off. Some TV newsers’ reactions:

“You respect the American people by telling them the truth.” – @SenKamalaHarris #VPDebate

Good marks for the moderator so far:

Good question from @SusanPage on how the WH can expect the American people to follow health guidelines that the WH itself does not abide by – those include wearing a mask, social distancing. #VPDebate #COVID19

We’re lucky to have @SusanPage

@VP answers rose gardens question , but does it to late…has to adjust to time contraints

Always grateful for the fact that CNN puts the questions on the screen pic.twitter.com/N4ATPPAlyt

Classy @VP @Mike_Pence congratulates @SenKamalaHarris for her historic place on a ticket – and on the debate stage. #VPDebate

.@VP is calmly and politely bulldozing over the questions and answering what he wants to answer showing his experience as a debater. @KamalaHarris has already scored on the Trump tax issue better than @JoeBiden did and addressing the camera head on effectively. This is a debate

Both Pence and Harris were accurate enough about the Trump tax cut: Pence is right that most Americans got a tax cut, wasn’t just the rich; Harris is right that it disproportionately benefited the rich.

This tax attack is what was Rs were hoping @realDonaldTrump would do last week. The @VP did it better.

Questions are being asked. They are not being answered.

I knew I had heard the line that @VP used tonight. pic.twitter.com/XlrqJmUZli

Pence did not answer question on Roe v Wade.

Pence: I”m pro-life and I don’t apologize for it. #VPDebate

Aside from fly on his head @VP Pence did solid job, he’s a good man but @SenKamalaHarris didn’t flinch & was also smooth & well-briefed. GOP needed clear win to make up double digit deficits. Not sure Pence was that good. It was a tie. #Abortion & #COVID19 will be decisive issues

Overall IMO, the debate format is stale and unimaginative. All the talent we have in the news production industry, can’t we do better? It’s not 1965. And that was a good year, Mustang… me. But, please let’s raise the game to meet the stakes. #debate

People became less impressed with the moderator as the night has gone on:

What part of your time is up does he not understand?

A mute button might work to stem interruptions and breaching time limits. So would a moderator with an air horn. pic.twitter.com/2HZlhb8xVA

Perhaps someone got in Page’s ear:

About an hour in, moderator @SusanPage gets tough with VP for not adhering to the time limits. “I did not create the rules for tonight,” she said. “You campaigns agreed to the rules.” “I’m here to enforce them.” pic.twitter.com/JfndqU6qAl

Oh, and then a fly showed up on the vice president’s head at around the 10:20 p.m. ET mark, and didn’t leave for roughly 2 minutes; maybe longer. Needless to say, Twitter was abuzz (pun intended). 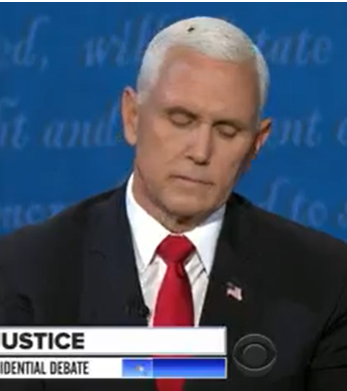 ABC’s Martha Raddatz and NBC’s Lester Holt are two experienced debate moderators in their own right. They provided insights on the evening’s proceedings.

Raddatz commented on how Page performed as moderator, saying, “You really do have to listen to what they are saying, and then follow-up and we seem to move pretty quickly on to the next question,” remarked Raddatz. “There were had very few answers to questions that Susan Page asked and they were well-crafted questions.”

Holt commented on the debate more broadly: “I think it’s fair to say a lot of people holding their breath after last week wondering what the tone would be in this debate. Largely civil … It’s not without its moments, but we certainly got a chance this time to hear from both of them and take a measure and the question, perhaps, right now not who won or lost but who did what they had to do under the circumstances.”

VP Pence needed a no FLY zone. But even through that was disciplined and polished – hitting marks. Senator Harris landed some blows. Both chose NOT to answer some questions – but both had almost exactly the same speaking time. https://t.co/UHwuA8OLoI

Baier’s colleague Chris Wallace added: “I think they both ducked a lot of questions, Martha [MacCallum]. You know, well, she [Sen. Kamala Harris] ducked the question about what the restrictions or lack of restrictions would be in California. Mike Pence said exactly the same on restrictions in Indiana. I thought that her worst refusal to answer was exactly as you say, on the packing of the court. But I thought that Pence had an equally egregious refusal to answer when he was asked, what would you do about protecting people with preexisting conditions? And he absolutely refused to even discuss the issue.

I thought both of them had a pretty good night. I thought that Kamala Harris’ best point was when she was going after President Trump and Mike Pence on healthcare and the effort to overturn Obamacare in the Supreme Court the week after the election. She said, if you have preexisting conditions, they’re coming after you. If you’re one of the 20 million people on Obamacare, they’re coming after you. If you’re one of the people who is 26 or under who’s on your family’s plan. I thought, on the other hand, that Pence was most effective when he went at Kamala Harris on the question of a left wing agenda that she and Biden would raise taxes as soon as they came in, and also that they would push their environmental, what he said, radical environmental agenda at the expense of American workers. I thought it was actually a pretty even night. I agree with Brit, I don’t think it’s going to change that narrative very much.”

CBS’ Norah O’Donnell: “We know that the plexiglass in between them did not stop the interruptions of either the moderator or the candidates.”

ABC’s Mary Bruce: “What simply was most striking, having been in the room last week and here tonight, was just how normal this felt. It felt like a normal traditional debate, despite the very unusual circumstances here, seeing the two of them separated by that plexiglass, all of us here in our masks. The level of civility. There was a low bar for it after last week’s debate, but it just was astounding straight off the bat.”