NEXT:30 Most Impactful TV Newsers of the Past 15 Years: Ann Curry
PREVIOUS:Scoreboard: Thursday, Jan. 17 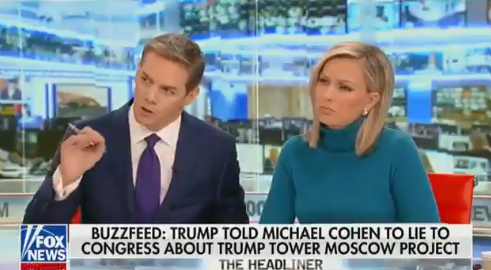 BuzzFeed News reporters Anthony Cormier and Jason Leopold published a rather extra-ordinary story late last night claiming that President Trump directed his former personal lawyer and “fixer” Michael Cohen to lie to Congress during his testimony over discussions between the Trump Organization and Russian authorities about a Trump Tower project in Moscow.

The reporters are fiercely standing by their reporting and their sources. Cormier appeared on CNN New Day this morning to talk about the report, telling Alisyn Camerota and John Berman that his sourcing, “goes beyond the two on the record. I am the individual who confirmed and verified that it I am telling you our sourcing goes beyond the two I was able to put on the record. We were able to gather information from individuals who know this happened.”

However, Cormier did admit that he had not “personally” seen the evidence underlying the report.

“I am rock solid. My sourcing on this goes beyond the two that are on the record. This 100% happened,” @a_cormier_ says about his BuzzFeed report that President Trump directed Michael Cohen to lie to Congress about proposed Moscow project. https://t.co/sF3Xur6QJ0 pic.twitter.com/7WQbTI6pF8

This has been the No. 1 story on cable news today, and a number of pundits and TV news anchors have stated that if the BuzzFeed report is indeed true, Trump’s action is grounds for impeachment.

Fox News Sunday anchor Chris Wallace remarked that what transpired is “very disturbing, if true,” but that it should be taken “with a giant block of salt.”

“It’s the kind of thing that could get you impeached, but we don’t know whether, in fact, that’s the case,” Wallace said. “If it’s true — with a giant “IF” — it’s a big deal. If it’s not true, it’s a big deal because it’s going to make the press look really stupid.”

Deputy White House press secretary Hogan Gidley appeared on America’s Newsroom this morning, and said to Bill Hemmer and Sandra Smith, “There is nothing in that [Buzzfeed] piece that can be corroborated.”

When asked by Hemmer whether he actually denies the BuzzFeed report, Gidley didn’t answer, instead stating, “I am telling you right now this is why the President refuses to give any credence or credibility to news outlets because they have no ability to corroborate anything they are putting out there. Instead, they are just using innuendo and shady sources… the premise is ridiculous.”

ABC News chief legal analyst Dan Abrams appeared on GMA today, and remarked that this report is significant. “Now it’s easy. Up to this point we’ve talked about, where is the line for obstruction of justice,” Abrams remarked. “It’s not enough for example, some people say, to fire James Comey. What would be witness tampering? This is easy. If he told Michael Cohen to lie to Congress, no one would suggest that’s not obstruction of justice or witness tampering, and that would be a crime.” 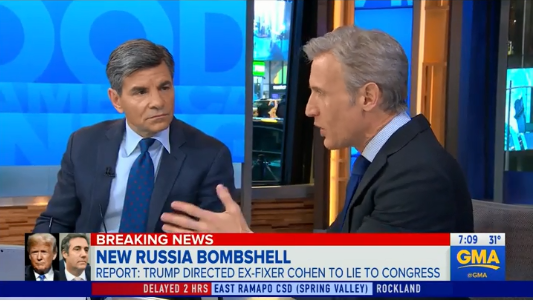 Former deputy assistant AG John Yoo appeared on America’s Newsroom, and said that if the report is true, it could be the “smoking gun” in the entire Mueller investigation.

“Michael Cohen has already pled guilty to lying to Congress, so he has severe credibility problems,” said Yoo, who worked in the Bush 43 administration. “But suppose it’s true. This could be the smoking gun that Trump’s critics have been looking for.”

Yoo added: “You recall that back in the day when President Clinton was impeached, the grounds for that impeachment was perjuring himself, but also trying to suborn perjury, exactly what Trump is accused of doing here. That is obstruction of justice,” he said. “You may recall that was one of the grounds that was given for articles of impeachment against Richard Nixon. So this is actually much more serious than what we have seen in the past about claims of Trump-Russia collusion.”

John Yoo, a former deputy assistant attorney general under the Bush administration: If true, @BuzzFeed report could be “the smoking gun that Trump’s critics have been looking for.” https://t.co/FcsmlKXXi2 pic.twitter.com/zfzxCxNQg8

Newt Gingrich, however, doesn’t seem to take the report (or BuzzFeed News as a news organization) seriously, telling Fox & Friends earlier today, “BuzzFeed is the equivalent of those tabloids you buy at the grocery store on the way out that introduce you to Martians,” Gingrich said. “And tell you the story of three stars who had anguished lives you never knew about…To take BuzzFeed seriously a sign how desperate we are for news.”

Dan Rather was among the TV newsers to chime in via Twitter:

If true, the Buzzfeed story is a political earthquake. Caution: we really know little; Mueller knows much. Time to be steady, let facts lead us to truth. But at almost every turn in this national nightmare, implausible has become plausable. The walls do appear to be closing in.

Cohen is scheduled to testify before Congress in February. He already pleaded guilty to lying to Congress about the Russian real estate deal, and is scheduled to begin a 3-year prison term on March 6.