NEXT:Craig Melvin is Stepping Down as Co-Anchor of Saturday Today
PREVIOUS:Chuck Todd Says 'The Roger Ailes-Created Echo Chamber' Is a Reason for Distrust in the Media 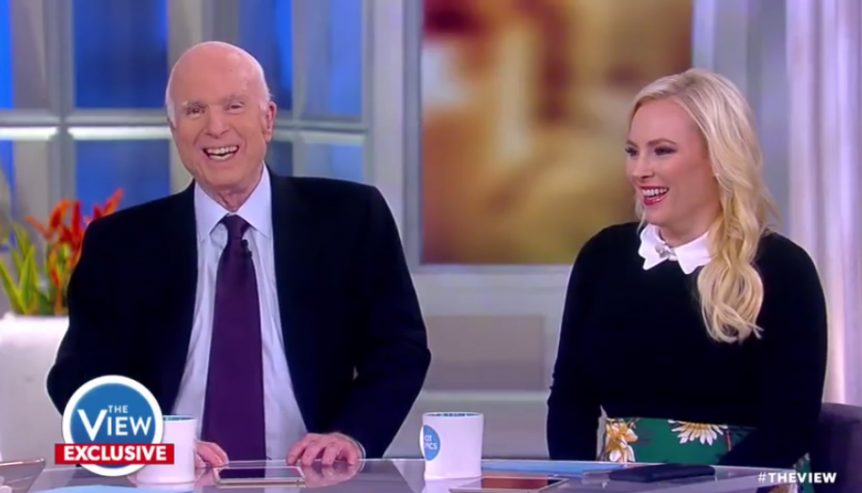 Sen. McCain was diagnosed with an aggressive brain tumor in July 2017 and had been undergoing treatment. But on Friday his family announced he had decided to discontinue that treatment.

My heart is broken. I am so lucky to have lived the adventure of loving this incredible man for 38 years. He passed the way he lived, on his own terms, surrounded by the people he loved, in the the place he loved best.

The Sunday shows took time to remember the late senator this morning, who, in addition to a lengthy career in politics, is known for his heroism as a bomber pilot during the Vietnam War. When McCain’s plane was shot down, he spent more than five years as a POW. While being held by his captors, he suffered torture that left him with lasting disabilities.

A look back at some of Senator John McCain’s many appearances on Fox News Sunday pic.twitter.com/iBpzSSJaNw

.@JonKarl remembers covering John McCain’s 2000 presidential campaign and says McCain’s campaign was about “serving a cause greater than oneself.”

“That 2000 presidential campaign was unlike anything I ever covered,” Karl says https://t.co/rrM65wKUMi #ThisWeek pic.twitter.com/SnQB7cygrr

TV newsers took to Twitter Saturday night to praise the late senator. He was someone who made himself very accessible to the media over the years, and had been a critic on President Trump’s attacks on the media.

Having interviewed @SenJohnMcCain over 30 years, I can testify he didn’t always like our tough questions, but he always appreciated the critical role a free press plays in a democracy. For that, and so much more, I will always be grateful. An American hero. May he Rest In Peace. pic.twitter.com/abESrZZhkP

The passing of an American patriot who demonstrated his trademark bravery until the very end. Thinking about Cindy, Meghan and his devoted family tonight. https://t.co/n1cW7y2ICY

As an Arizonan, he was “my” senator for most of my life. I was always so moved by his personal story of courage. He was rare indeed. He did our state proud. Rest In Peace.

RIP John McCain. American Hero. 🇺🇸 He dedicated his life to serving a cause greater than oneself. Always enjoyed covering him in the Senate and on the Straight Talk Express. #service #hero

No matter where we all are on the political spectrum, as Americans we should acknowledge that @SenJohnMcCain⁩ showed incredible sacrifice and bravery on behalf of our country under brutal circumstances. God bless his loved ones who are grieving. 🙏🏼 pic.twitter.com/H4pqs0lYuR

“We want these people to be great people, we want them to be grand. And he was.” @HardballChris on Sen. John McCain. pic.twitter.com/nLHJmVEXb4