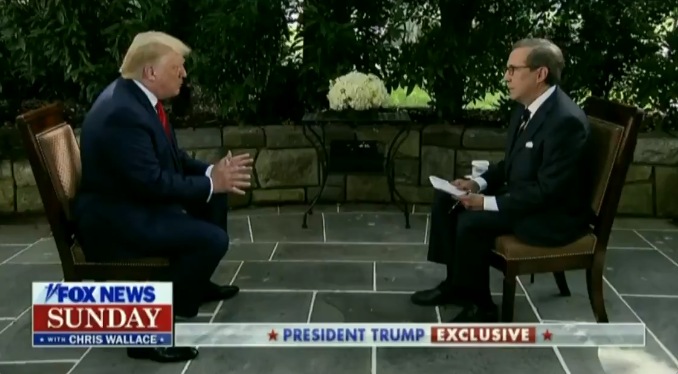 Fox News Sunday moderator Chris Wallace trended on Twitter for most of Sunday, and for good reason.

Widely considered the most skilled interviewer on television news today, Wallace fired a wide variety of questions at President Trump, and was largely able to follow up and fact-check the president’s falsities in real time, without getting into a yelling match with him.

Some interviewers attempt to do real-time fact-checking, but Wallace seemed more prepared than most and was largely able to push back when the president’s misrepresentations and lies were especially blatant.

At one point during the interview, which taped Friday on a hot D.C. day, Wallace told the president that according to recent polling, including a Fox News poll, a majority of Americans feel former vp Joe Biden is more mentally fit to serve as president than he is. This, despite the president and his campaign repeatedly claiming that Biden isn’t 100% “there.”

Trump then referred to a cognitive test he took earlier this month at Walter Reed Medical Center, and bragged to have “aced” the test so impressively that the doctors were “very surprised” and supposedly told him: “That’s an unbelievable thing. Rarely does anybody do what you just did.”

The president also claimed that not only did he score perfectly on the test, but that it was “very hard” and that he doubted Wallace could do as well. Wallace laughed and told Trump that he did indeed take the same test online and it was rather easy. Wallace said the test included drawings of animals to identify and counting backward from 100 by seven.

One of the bizarre back-and-forths you’ll ever find in a presidential interview.

Wallace: In the Fox poll, they asked people, who is more competent? Who’s got—whose mind is sounder? Biden beats you in that.

Wallace: Incidentally, I took the test too when I heard that you passed it.

Trump: Yeah, how did you do?

Wallace: It’s not—well it’s not the hardest test. They have a picture and it says “what’s that” and it’s an elephant.

Trump: No, no, no … You see, that’s all misrepresentation.

Wallace: Well, that’s what it was on the web.

Wallace: Well, one of them was count back from 100 by seven.

Trump: Let me tell you …

Trump: I’ll get you the test, I’d like to give it. I’ll guarantee you that Joe Biden could not answer those questions.

Trump: And I answered all 35 questions correctly.

Another notable moment from the interview was when the president wouldn’t say whether he would immediately accept results of the 2020 election if he lost.

Wallace: But can you give a direct answer, you will accept the election?

Trump told Wallace that many Covid-19 cases are just young people who have “sniffles.” He said “I’m glad” America leads the world in testing, but “we’re creating trouble.”  Trump then defended his prediction that the virus would “eventually just disappear,” saying, “I’ll be right eventually.”

There were a number of instances where Wallace wasn’t able to interject. That’s understandable. However, the way the Fox News Sunday producers edited this interview in advance to include Wallace voiceover fact-checks so the viewers could have context proved to be a very interesting and ultimately successful technique.

Many media personalities lavished praise on Wallace for pushing back on Trump in real time. Wallace also got Trump on the record to say that he would sign a “full and complete healthcare plan” in two weeks. Whether that happens remains to be seen.

Here were some reactions to the interview via social media:

A tip of the Stetson to Chris Wallace. A consummate pro. Tough. Prepared. Fair. Always ready with a fact check and a follow-up question. I imagine there is quite a scene at the White House trying to contain the fallout.

This is just one segment, but every American voter should watch all of Chris Wallace’s @FoxNewsSunday interview with President Trump. https://t.co/uEDY5hdqeQ

Yowza, Chris Wallace …! Now that is how you interview Trump ladies and gentleman. Chris is one of the best ever for a reason, but shit, I was waiting for the Mortal Combat narrator to yell “finish him” by the end. … Who on Trump’s comms team prepped him for this?!?

I think I’ve watched every television interview Donald Trump has done since announcing his candidacy in 2015. Chris Wallace just did the best one, and by some distance.

My favorite part of the very good Chris Wallace interview with @realDonaldTrump:
TRUMP: “Now we have the 1619 project. What is THAT all about?”
WALLACE: “Slavery.”

Kudos to Chris Wallace for repeatedly showing and explaining to his viewers—and to the president—the facts in his lengthy coronavirus exchange with Trump on @FoxNewsSunday.

Chris Wallace should not spend one second of this interview defending himself as a tough interviewer. He’s top-notch.

Jemele Hill with the most backhanded of compliments:

Every journalist in America who might have an opportunity to question Trump should lock themselves in a room with no distractions and watch the Chris Wallace interview 25 times.

For the past few years I’ve avoided publicly praising my former colleague, Chris Wallace, so as not to cause him trouble. But my caution has been overtaken by events—that is, by today’s show. I offer Chris hearty congratulations for his continued professionalism and excellence.

Old enough to remember certain Democrats whining about @PeteButtigieg sitting down for interviews and town halls with Chris Wallace. My how the worm turns!

I’m only seeing snippets on Twitter but I gather Chris Wallace is absolutely destroying Trump (in his staid, professional way)?

The Biden camp should just pay to run this Chris Wallace @realDonaldTrump interview repeatedly on every network between now and election day. Great journalism, accurate reflection of all things Trump.

He’s not afraid of his guests. That’s his strength. https://t.co/ctr5v8PDji