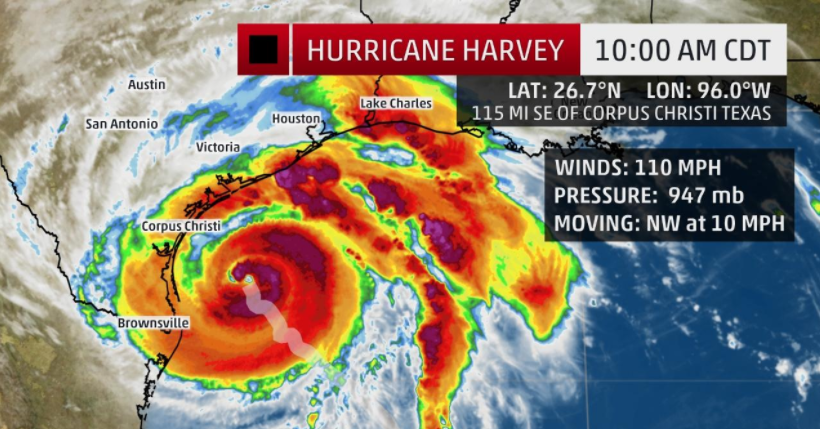 Hurricane Harvey is getting closer and closer to the lower and middle Texas coasts, and TV newsers are out in full force reporting from the ground across the western Gulf, from lower Texas all the way up to New Orleans.

The Weather Channel’s Jim Cantore is on the ground in Corpus Christi, Texas, a city of 300,000 (Texas’s 8th-largest) that’s likely to be hit by the eye of the storm.

As of 10 a.m. local time, when the National Hurricane Center released its latest update, Harvey is a Cat. 2 (110 mph winds) that’s 100 miles southeast of Corpus Christi, and moving northwest at 10 mph. If the speed remains consistent, Harvey could strike the city late Friday, and CC could experience up to 18 inches of rain.

Resident move-in at the University of Texas A&M-Corpus Christi, which is literally on an island, was supposed to take place on Wednesday. Move-in has been postponed until Sunday. Fall semester classes are officially supposed to begin on Monday, but it’s tough to see how that will happen based on the current forecasts.

On the broadcast news side – Here’s CBS News’s Manny Bojorquez reporting for CBS This Morning from Port Lavaca, TX: