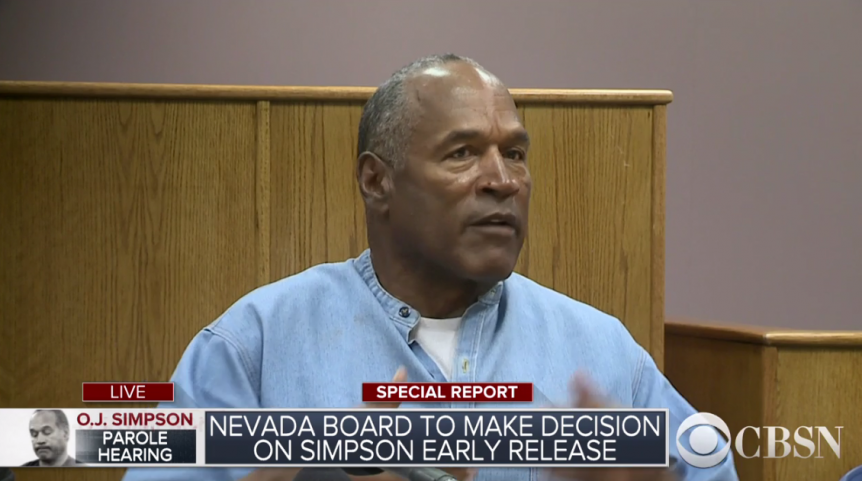 The iconic football star-turned-actor/pitchman, turned murder-suspect, and now convict O.J. Simpson finds out today if he’ll be granted parole, and released from a Nevada prison after serving 9+ years of a 33-year sentence for armed robbery and kidnapping of two sports memorabilia agents at a Las Vegas hotel & casino in 2007.

The legendary 1995 murder trial lasted 8 months. This hearing, presided over by four members of a Nevada parole board, could be done in less than an hour. While the hysteria over this hearing won’t compare to the original trial, TV news was still all over it. This includes ABC, NBC and CBS, all of which are breaking into their daytime programming to broadcast special reports.

The national networks’ legal correspondents will be on center stage today, as well as one of the prosecutors in the 90’s murder trial Christopher Darden, who is contributing analysis for NBC News. Rikki Kleiman is on CBS. She got her start on Court TV during the murder trial. Dan Abrams, then with NBC News, is now with ABC News; Cynthia McFadden, who was with ABC News during the first O.J. trial, is now with NBC.

One TV newser who won’t be involved with any coverage is Greta Van Susteren, who truly became a prominent TV newser and legal expert for CNN during the murder trial 22 years ago.

So many networks have called me to appear on their networks about OJ parole hearing…I have declined each one. Same w/ print journalists.

The members of the Nevada Parole Board: 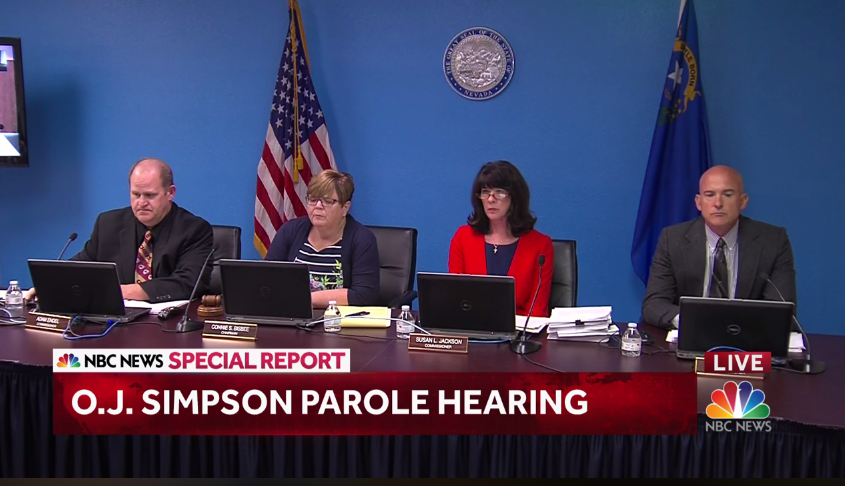 And here’s Simpson, who joined via video conference from Lovelock Correctional Facility, roughly 100 miles from where the board was situated in Nevada’s capital, Carson City. 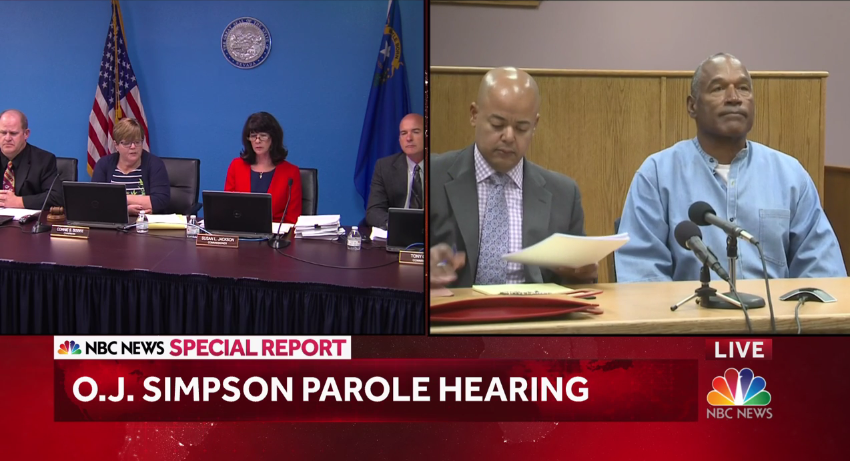 At one point during the hearing, the chairwoman on the board said: “We have you as being the age of 90…I mean 70,” a line which elicited laughter from Simpson, his representation and the board members. Perhaps some nerves. 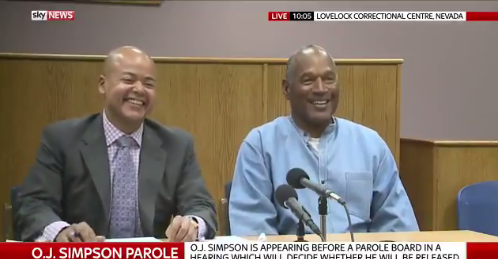 Here are some TV newser reactions to the hearing:

#OJSimpson has the entire airport at a standstill. It’s like the 90’s no one is moving. I think some are willing to miss fights.

Sure feels like parole board is headed toward letting OJ out. We shall see. Decision expected today.

What we haven’t heard yet?…”I made a terrible mistake for which I’m sorry. I’m a changed man.” #ojparole live cvg on @MSNBC

Some questionable judgment on OJ’s part. An inch away from parole yet still litigating the crime. Antagonizing parole board?

This cannot be in OJ’s best interest to be telling this story – focus should be on his conduct as prisoner, not the crime. #OJSimpsonParole

Years ago I did stand-up in Lovelock, NV. I felt like I was testifying before the parole board too. #OJSimpsonParole

How surreal is it to watch O.J. Simpson on TV all these decades later, and especially after watching “Made In America.” #OJSimpsonParole

Not doing himself any favors. OJ says he understands parole bd doesn’t “give much consideration to” prison courses he took #OJSimpsonParole

OJ tells parole board “I’ve always been a giving guy”

One of OJ’s lines where he claims he’s lived “a conflict-free life” got much attention from TV newsers.

I’ve basically had a conflict free life – OJ in response to Parole board question about the victim empathy course he took in jail.

OJ Simpson says he has “lived a conflict-free life.”

“I’m at a point in my life where all I want to do is spend time, as much time as I can with my children and my friends, and — and I’m not looking to be involved with the media. I’ve had so many offers for interviews when I’ve been here and in Lovelock and turned them all down. O’m not interested in any of that. I’ve done my time. You know? I’ve done it as well and as respectfully as I think anybody can.”

OJ’s eldest daughter Arnelle then gave remarks for about 5 minutes, calling her father “my best friend and my rock…not perfect but has done his best.” 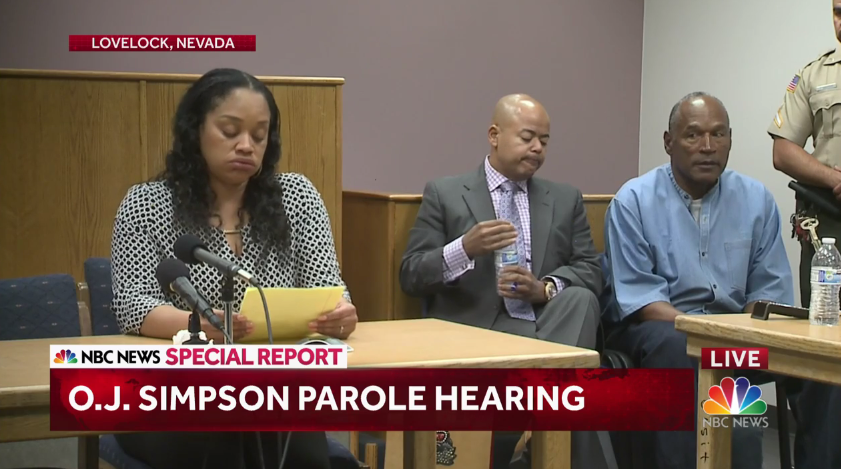 Then, a victim in the botched robbery, Bruce Fromong provided remarks. The chyron is pretty self explanatory. 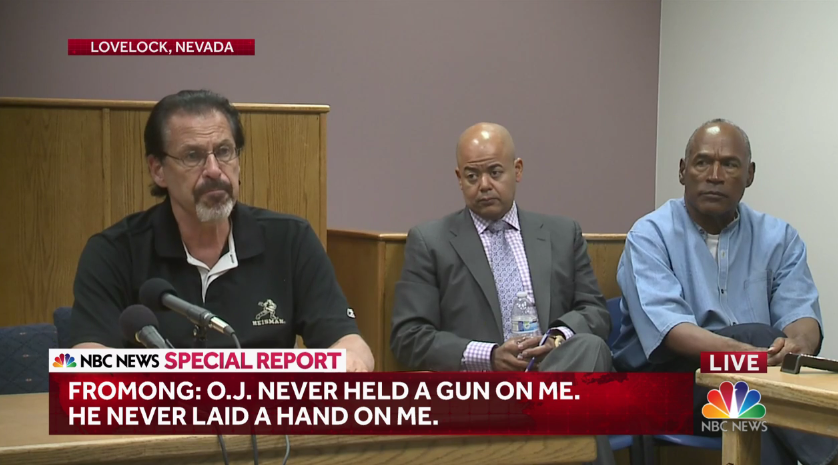 2:18 p.m. ET: The hearing has been called into recess. Deliberations to begin shortly.

O.J. Simpson was granted parole by the board at approximately 2:50 p.m. ET. He will be freed from prison in October.