NEXT:Basic Cable Ranker: Week of Sept. 3
PREVIOUS:Jeff Zucker Is Back at Work 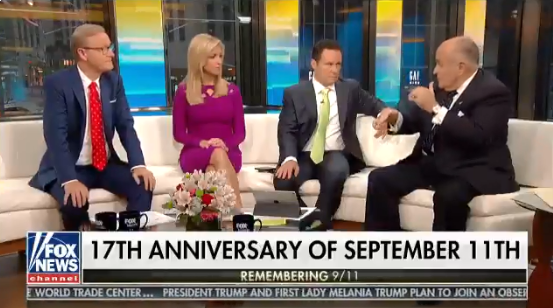 Today marks 17 years after the horrific 9/11 terrorist attacks, an event that shook New York and the United States as a nation.

All three broadcast networks carried the White House moment of silence at 8:46 a.m. ET, when the first of two hijacked planes was flown into the north tower of the World Trade Center.

8:46 a.m. A moment of silence is held at the World Trade Center site in lower Manhattan at the time when the first plane struck the North Tower 17 years ago. pic.twitter.com/YqKEpps0ie

A moment of silence is observed at Ground Zero to mark the moment U.S. American Airlines Flight 11 hit the North Tower on 9/11 17 years ago #NeverForget pic.twitter.com/s2qo60wAds

17 years later, we will #NeverForget.

Fox News, CNN and MSNBC’s morning shows all devoted a significant amount of coverage to 9/11 remembrances, with Fox News dedicating perhaps the most.

Fox & Friends led this morning’s broadcast led with 9/11 tributes. Anchors Steve Doocy and Brian Kilmeade were anchoring the morning show 17 years ago today, and were back again this morning.

“There are certain images that are so powerful we only show them once a year,” said Doocy. “And this morning we’re going to show them.”

Rudy Giuliani remembers first responders who gave their lives to save others on #September11th 17 years ago today pic.twitter.com/CMLobNbX8K

During the 9 a.m. ET hour, Fox News televised Sec. Mattis and VP Pence’s remarks at the Pentagon, while CNN and MSNBC slowly moved away from the 9/11 remembrances, and provided more reporting on Hurricane Florence, a Category 4 storm that’s that’s set to strike the Carolinas in the coming days.