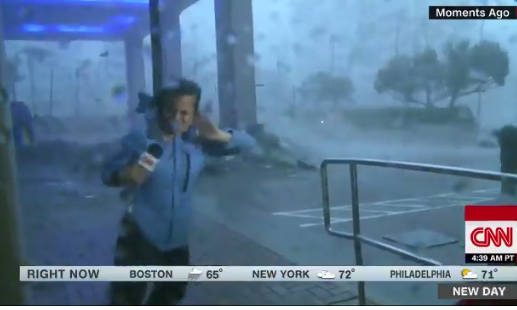 Hurricane Maria made landfall on Puerto Rico last Sept. 20, and became one of the worst natural disasters ever to strike the island. Maria was a Category 4 storm with winds of more than 155 mph, crippling infrastructure and leading to roughly 3,000 deaths.

The recovery is now slowly but surely turning into to long-term rebuilding mode; yet the recovery is still far from over in many parts of the U.S. territory.

TV news is marking the one-year anniversary of the disaster.

CBS News correspondent David Begnaud emerged as one of the most prominent on-the-ground reporters to cover Maria from the ground, and he’s also among the TV newsers who are speaking out on the one-year anniversary of Maria’s landfall. His Maria-focused documentary airs Sunday night on CBSN, and he has been promoting the documentary across CBS News programming today.

One year ago today, Hurricane Maria slammed into Puerto Rico with sustained winds of 155 mph. @DavidBegnaud was in Puerto Rico when the Category 4 hurricane made landfall and has been following the recovery efforts. He joins us to preview a new documentary premiering this Sunday: pic.twitter.com/VBlK328XE9

A year ago, today, we were in San Juan as Hurricane Maria thrashed Puerto Rico.
This morning we are in New York finishing a documentary that will air Sunday night. A preview of the doc is about to run on @CBSThisMorning pic.twitter.com/auXlQaC4Ya

Begnaud won the Public Service Award for his coverage of Maria last year, and he became widely known among Puerto Ricans for documenting breaking news from the hardest hit parts of the island via social media. One of his interviews with the Governor of Puerto Rico was credited for bringing awareness about the lack of supplies being delivered to the residents.

We sat down with Begnaud not long after he returned to the states in early October 2017:

I’m not going to stop reporting just because I’m back on the mainland. I didn’t go there trying to attract a social media audience. I didn’t go there trying to make a name for myself. I’m going to keep asking questions from here, and we will go back to Puerto Rico, and we will go back soon. I had never been to Puerto Rico before this happened, but based on what I saw, Puerto Ricans are incredibly resilient and amazingly patient. At the end of the day they are American citizens, and I’ve never, in my reporting, seen American citizens have to wait so long to get help.

Bill Weir, Leyla Santiago and John Sutter are taking CNN viewers back to the island to look at the continuing challenges to rebuild, the successes and failures of government agencies involved in the recovery process as well as the ongoing human toll. The one-hour special will air on CNN Friday night.

Today marks one year since Hurricane Maria made landfall in Puerto Rico.

We spoke with Weir not long after he returned from Puerto Rico about his experience reporting from the island. Being able to separate wearing the journalist hat from wearing the hat of human wasn’t easy :

I wrestled with that question a little bit, not in terms of helping people because the need there was so great. Truck operators and security guards were sharing our beef jerky and bottled water with whoever we could because we had enough provisions for ourselves. But on the island of Vieques, people were lined up to use satellite phones and hadn’t spoken to the outside for a long time. There was one woman who was so desperate and was begging her parents just to send her some cash so she could survive. I said: “Look, I can give you a few bucks.” When I did, the outpouring of emotion was so overwhelming, the gratitude was so explosive and her frustration was so raw. That’s the reason I put that moment in the piece.  I was wrestling with whether or not that does cross a line, but ultimately her reaction said way more than I ever could in voice over track. So it’s a rare example I think of just relating to these people on a human level. My heart is broken for the need down there, but I was gratified that for some reason people felt compelled to reach out to me on social media and ask if they sent me $50, could I buy their grandmother some food. That’s the level of desperate communication that is down there. I wish I could help every single person who reached out to me, but the best I can do is tell the stories and wave the red flag of need for these American citizens who are still down there suffering in great numbers.

NBC News’ Gabe Gutierrez appeared on Megyn Kelly‘s program in the 9 a.m. hour to reflect on what transpired last year, and to promote his Hurricane Maria special report that will tonight on NBC Nightly News with Lester Holt.

NBC’s @gabegutierrez has a story of one everyday hero who took it upon himself to rush supplies to the island, “I’m a true Puerto Rican, I carry my island in my heart.” he says. pic.twitter.com/RwZRw4tDYw

The Weather Channel is running three packages under the umbrella, “Maria: One Year Later”:

The first is a quick look back at some of the most intense moments from Hurricane Maria and the immediate aftermath. This is told from the perspective of meteorologist Paul Goodloe, San Juan Mayor Carmen Yulin Crus, and Puerto Rico Governor Ricardo Rosselló, who were all present in Puerto Rico witnessing this incredible and historic storm.

The second package has to do with the Hurricane Maria death count. The initial report listed only 64 official deaths related to the hurricane, but after months of speculation, officials have raised that count to 2,975.

Lastly, below is Paul Goodloe telling the story of how Puerto Rico’s National Weather Service maintained operations after losing both of their weather radars during Maria.

Fox News Channel’s Phil Keating is reporting from Puerto Rico, speaking with survivors of Maria as well as how the recovery efforts have been progressing over the past year.