NEXT:Anthony Bourdain Dead at 61
PREVIOUS:President Trump Said Twice This Morning That He's a 'Very Big Believer in Freedom of the Press' 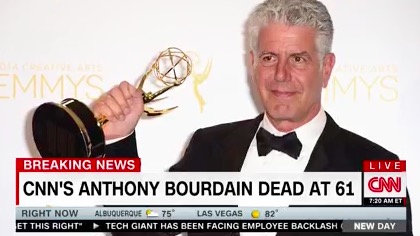 “It’s just a horrible, horrible shock on every level,” said CNN’s Alisyn Camerota during New Day’s coverage of the death of her colleague Anthony Bourdain. CNN broke the news to its viewers at 7:19 a.m. this morning that Bourdain had been found unresponsive in his hotel room in Strasbourg, France. He took his own life.

“How do you reconcile someone who’s every fiber was the celebration of life? How do you reconcile that with the news that it was a death by suicide?” asked New Day co-anchor John Berman. “It’s very, very hard for us this morning. I know it’s hard for everyone who loved his work.”

“Anthony was a CNN host since 2013 when CNN took a chance on him to host a show on the news channel. It was wildly successful,” said Fox & Friends co-host Steve Doocy reporting the news at 7:31 a.m.

NBC’s Today show, CBS This Morning and ABC’s Good Morning America all led off their 7:30 half hours with the news of Bourdain’s death.

“Our hearts and prayers go with the Bourdain family,” said Amy Robach on GMA. “It’s a sad, sad piece of news we had to deliver,” added Alex Wagner on CBS. “He was such a friend of the show. He passed through these doors many, many times,” said Today show co-anchor Hoda Kotb.

President Trump was also asked about Bourdain as he left the White House for the G-7 Summit.

.@realDonaldTrump on Anthony Bourdain: “I think it’s very sad. I want to extend my heartfelt condolences. That was very sad. When I woke up this morning. Anthony Bourdain is dead. And I enjoyed his show. He was quite a character.”