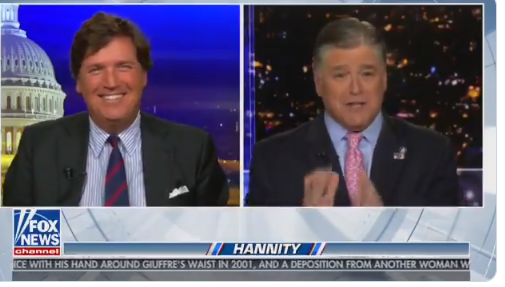 While the 8 p.m. host didn’t address his absence from the program during his hour, Hannity did, right as Carlson tossed to him at the conclusion of his hour.

Here’s Sean Hannity making sure his viewers know that Tucker Carlson’s vacation was pre-planned and had nothing to do with Tucker saying white supremacy is a hoax.

“So it was a planned vacation! I knew about it months and months ago. I can confirm as I was denied time off.” pic.twitter.com/zkgJRj3Mma

Why the absence? Carlson told viewers at the conclusion of his Wednesday, Aug. 7 broadcast that he was “heading to the wilderness to fish with my son,” adding, “politics is important, fishing with your son, sometimes more important. So I’m doing it.”

However, some have questioned the timing because the announcement came one night after Carlson claimed on his broadcast that white supremacy is “not a real problem in America,” and also claimed that it a “hoax” that’s being used to divide people; remarks that caused uproar among hosts and contributors on other networks, many of whom spent a chunk of their respective shows that day discussing Carlson’s remarks and criticizing them.

The network confirmed that the vacation was scheduled in advance of the remarks.