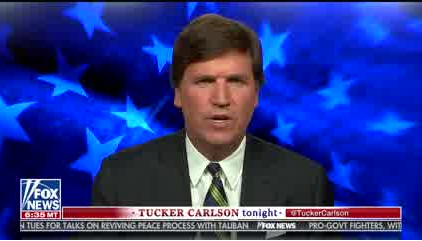 Host of one of cable news’ most-watched shows, Tucker Carlson is under fire this evening after controversial remarks conerning women he made nearly a decade ago were discovered by liberal advocacy group Media Matters.

Carlson put out the below statement this evening in response to the clip:

Carlson’s remarks were made on the Bubba the Love Sponge Show, a radio program he sporadically called into, from the time period of 2006 – 2011. Carlson moved from MSNBC to Fox News in 2009.

Bubba the Love Sponge is broadcast on the conservative and libertarian talk radio station WWBA in Tampa, and is hosted by radio shock jock Todd Alan Clem.

During one of his appearances, Carlson seems to defend Warren Jeffs, who had once been on the FBI’s most-wanted list for arranging marriages between adult males and underage girls, saying of Jeffs: “he’s not accused of touching anybody; he is accused of facilitating a marriage between a 16-year-old girl and a 27-year-old man. That’s the accusation. That’s what they’re calling felony rape.  That’s bullshit. I’m sorry. Now this guy may be a child rapist. I’m just telling you that arranging a marriage between a 16-year-old and a 27-year-old is not the same as pulling a stranger off the street and raping her. That’s bullshit.”

Carlson added: “Look, just to make it absolutely clear. I am not defending underage marriage at all. I just don’t think it’s the same thing exactly as pulling a child from a bus stop and sexually assaulting that child.”

The reason we released this is precisely because the things you say on your Fox News show echo the misogyny displayed in those clips. We were actually helping people better understand just how vile your current Fox News show is by showing what that worldview really looks like. https://t.co/R4TmeFN6jK

Carlson isn’t the only Fox Newser under fire this weekend. Jeanine Pirro made controversial remarks yesterday on her top-rated Saturday night opinion show, claiming that Minnesota freshman congresswoman Ilhan Omar is “sharia compliant” and not loyal to the U.S. Constitution because she wears a hijab.

“We strongly condemn Jeanine Pirro’s comments about Rep. Ilhan Omar,” Fox News said in a statement. “They do not reflect those of the network and we have addressed the matter with her directly.”

Pirro added the following in a statement of her own, one where, unlike her employer, she doesn’t seem to acknowledge that she crossed a line:

“I’ve seen a lot of comments about my opening statement from Saturday night’s show and I did not call Rep. Omar un-American. My intention was to ask a question and start a debate, but of course because one is Muslim does not mean you don’t support the Constitution. I invite Rep. Omar to come on my show any time to discuss all of the important issues facing America today.”

A producer from Special Report producer fired back at Pirro’s remarks yesterday. Not often does one see a producer go after million-dollar on-air talent, especially not from the same network.

@JudgeJeanine can you stop spreading this false narrative that somehow Muslims hate America or women who wear a hijab aren’t American enough? You have Muslims working at the same network you do, including myself. K thx. https://t.co/ZfKhRhlvM3

Thank you, @FoxNews. No one’s commitment to our constitution should be questioned because of their faith or country of birth. https://t.co/haqm7NWRw0