NEXT:Tuesday, Aug. 25 Scoreboard: Fox News Prime Time Earns 7.2 Million Viewers, No. 1 on TV
PREVIOUS:VP Pence Headlines Night 3 of the RNC in a Celebration of the Military and Women Voters 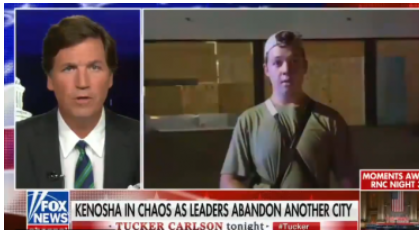 One of cable news’ most popular personalities, Tucker Carlson is under fire yet again for controversial remarks concerning race.

On tonight’s broadcast of Tucker Carlson Tonight, before the start of the RNC, the host brought up Kyle Rittenhouse, an Illinois teen who allegedly murdered two protesters during racial unrest over the police murder of Jacob Blake in Kenosha, Wis.

Earlier today, Rittenhouse was arrested in Illinois and charged with first-degree intentional homicide.

Here’s what Carlson said about the matter:

The 17-year-old who has been charged tried to run from the mob, tripped and fell in the middle of the street. A man ran up and smashed him in the head with a skateboard. The 17-year-old fired his gun.

What does that amount to? We’re unsure, a court will decide whether what you just saw qualifies as self-defense. We don’t have more details. We do know why it all happened, though.

Kenosha has devolved into anarchy. The authorities in charge of the city abandoned it. People in charge, from the governor of Wisconsin on down refused to enforce the law. They stood back and watched Kenosha burn.

So, are we really surprised this looting and arson accelerated to murder? How shocked are we that 17-year-olds with rifles decided they had to maintain order when no one else would? Everyone can see what was happening in Kenosha. It was getting crazier by the hour.”

We reached out to Fox News for comment on his remark, and they pointed us to a tweet from Carlson’s account, sent at 9:35 p.m. ET, with transcript and context.

Kenosha devolved into anarchy because the authorities abandoned the people. Those in charge, from the governor on down, refused to enforce the law. They’ve stood back and watched Kenosha burn. Are we really surprised that looting and arson accelerated to murder? pic.twitter.com/oul2KUiDi3

A fair number of journalists and TV commentators are freaked out what they heard.

Tucker Carlson: “How shocked are we that 17 year olds with rifles decided they had to maintain order when no one else would?”

How shocked are we that Tucker Carlson decided he had to maintain his fussy depravity when no one else would dare by giving a thumbs up to murder. No one, since being surprised at the latest bile to spew forth from this wanna-be man/persistently piqued desk jockey is redundant https://t.co/IXzWu7O2mM

An innocent black guy is killed by police and Tucker Carlson calls him a thug.

All I see in my Twitter feed is the RNC getting streamrolled by Tucker Carlson’s pro-vigilante justice commentary.

While Andy Ngo and Ben Shapiro tip toe around the subject, Tucker Carlson just says it outright. The right is pushing a line that it’s ok to shoot protesters. https://t.co/Cg54KaX95w

Vigilante violence was always one of my greatest worries about the present moment. And here we have a prominent TV host – a man who had the president’s ear – excusing it, rationalizing it. https://t.co/I3KMZveiEc

Tucker Carlson gets paid millions of dollars to go on TV and advocate for a race war that he would definitely be too chicken shit to fight in. https://t.co/PNicSAifQl

But there was at least one media personality in his corner:

Every time Tucker Carlson trends on this dumpster fire of a website, it’s because he’s being completely correct.pic.twitter.com/jAYeE66IEd