NEXT:Report: The United States Is One of the 5 Deadliest Nations For Journalists
PREVIOUS:Evening News Ratings: Week of Dec. 10 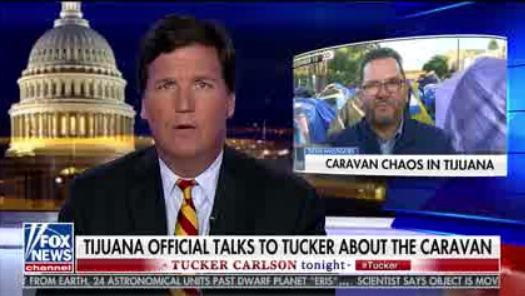 Tucker Carlson remarked on Monday night that he is not going to be detered by the forces who have influenced brands to suspend buying ad time on his highly-rated program in light of a remark he made on his show last week that immigration makes the U.S. “poorer and dirtier and more divided.”

A lot of people profiting from the policy don’t want the rest of us to think about it too much, they just want us to mouth the empty platitudes and move on. ‘Nothing to see here, shut up and go away.’ Those who won’t shut up get silenced. You’ve seen it a million times, it happens all the time. The enforcers scream ‘racist’ on Twitter, until everyone gets intimidated and changes the subject to the Russia investigation or some other distraction. It’s a tactic, a well worn one…and it won’t work with the show, we’re not intimidated. We plan to say what’s true until the last day.

Carlson went on to claim that illegal immigration is hurting America’s natural resources. “Thanks to illegal immigration, huge swaths of the region are covered with garbage and waste, and each illegal border cross or during the journey into our country.” He then suggests viewers check out a website called Arizona border trash, “dedicated to cleaning up the thousands of tons of garbage strewn across by illegal immigrants.”

THR’s Jeremy Barr has been keeping a tally of which brands are staying and which are leaving the program in light of Carlson’s immigration remarks, and writes that the number is presently at six. Pacific Life Insurance Company was the first to leave the show, and have been followed by Bowflex, SmileDirectClub (which is a major sponsor of cable news programming across the networks), NerdWallet, Minted.

UPDATE: As of Tuesday afternoon, Ancestry.com, Jaguar-Land Rover, Just for Men, IHOP, now say they’re suspending advertising on the show too…bringing the total to at least 9.

A number of brands aren’t jumping ship. They include Bayer, Sanofi, Farmer’s Insurance, and perhaps most prominently Mitsubishi, which told The Daily Beast that its media spend “is based on demographics and psychographics, not politics.”

A Fox News spokesperson said last week, “It is a shame that left wing advocacy groups, under the guise of being supposed ‘media watchdogs’ weaponize social media against companies in an effort to stifle free speech. We continue to stand by and work with our advertisers through these unfortunate and unnecessary distractions.”