NEXT:The Five Returns to Its Studio: 'We’re Sitting a Half Mile From Each Other and We’ve All Been Shellacked With High-Gloss Disinfectant'
PREVIOUS:Saturday, Sept. 19 Scoreboard: Fox News Live Coverage of Trump's North Carolina Prime-Time Rally Delivers Huge Ratings 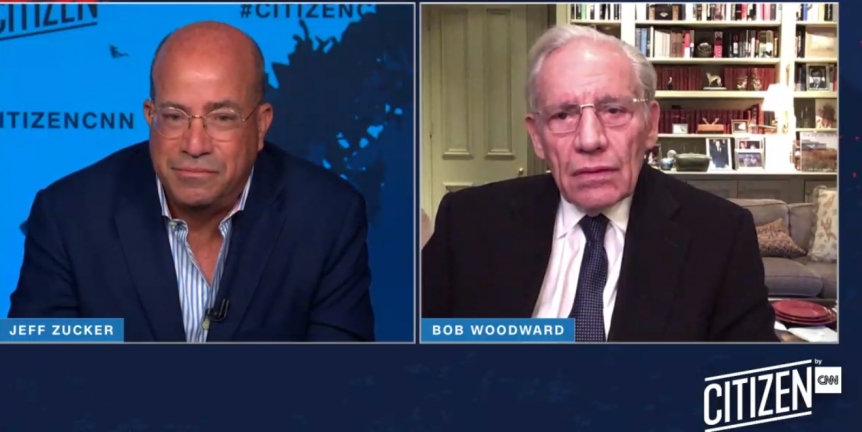 The discussion focused on what Woodward learned from his 18 interviews with the commander in chief for his book Rage.

As of December 2019, Woodward says the original plan for Rage was for it to be a foreign policy book about Trump’s relationship with North Korea. Woodward had the letters between Trump and Kim Jong-un, but the coronavirus pandemic changed all of that.

In addition to the coronavirus and Trump’s failure to appropriately address it (or as Trump said his decision to “play it down”), Trump and Woodward discussed the Supreme Court nominations over a span of the 18 recorded interviews.

Woodward said Trump expressed a lot of interest in and played close attention to all things having to do with the courts, and had worked closely with Sen. Mitch McConnell on it. Woodward said that Trump told him: “Mitch is going to do all of this for the federal judiciary. We’re going to get maybe 300 appointments, that’s possible,” before adding,  “Mitch blocked 142 Obama appointments and I’ve got 142 ‘golden nuggets’ right off the bat in 2017.”

Then Woodward remarked to Zucker, “You see this is such an issue with him, at one point he’s so exuberant about it, I joked, I said, ‘Mr. President, they’re going to make—put up a statue of you outside the Supreme Court.’ And Trump said, ‘Oh, that’s such a good idea. What a great idea, I’ll do it tomorrow. But, let’s not tell anybody it’s me pushing this.’ Think about what the cartoonists are going to do with that,” said Woodward.

Later in the conversation, Woodward made a point of recognizing the pivotal role CNN reporter Jamie Gangel and Woodward’s wife played in the decision to release audio of the 18 interviews with Trump.

He also gave props to a number of CNN personalities, prefacing his comment to Zucker by saying, “I’m sorry, I’m not trying to kiss your ass, I don’t work for you, I don’t need to … but you’ve got John King, who stepped right in and understood the book, along with Jamie Gangel. You have Anderson Cooper, with whom we spent all kinds of airtime on this.”

Woodward also mentioned Wolf Blitzer, for whom he saved his best for last: “You’ve got Wolf Blitzer. Yesterday, we spent 50 minutes going through the virus issues. … Wolf Blitzer is a fixture. You almost think if you went to one of those bread box televisions from the 1950s, there would be Wolf,” adding that he got to know Blitzer when he worked at the Jerusalem Post.

Zucker responded, “Bob, you’re the best spokesperson at CNN that I’ve ever seen.”

Woodward concluded that at the end of the day, every move Trump makes “is all about re-election … win, win, win.”