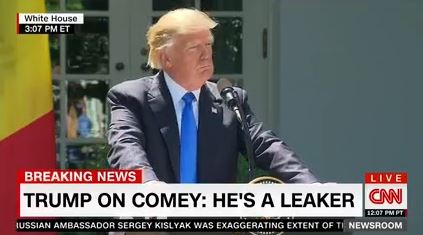 Pres. Trump took to twitter this afternoon to set the record straight on whether he has secretly recorded any White House meetings.

“I have no idea whether there are ‘tapes’ or recordings of my conversations with James Comey, but I did not make, and do not have, any such recordings,” Trump tweeted just before 1 p.m. today.

It was Trump who first discussed the potential of recordings of his conversations with Comey in a tweet sent on May 21. “James Comey better hope that there are no ‘tapes’ of our conversations before he starts leaking to the press!,” the president wrote.

When Comey was asked about it during Senate testimony on June 8, he said, “Lordy, I hope there are tapes,” adding later, “The president surely knows whether he taped me. And if he did, my feelings aren’t hurt. Release all the tapes. I’m good with it.”

Then, on June 9, during a Rose Garden news conference, ABC’s Jonathan Karl asked Trump, “When will you tell us about the recordings? Trump responded, “Over a short period of time.” Other reporters then jumped in: “Are there tapes, sir?” To which Trump said, “Oh you’re going to be very disappointed when you hear the answer. Don’t worry.”

Here are the presidents tweets from today:

…whether there are "tapes" or recordings of my conversations with James Comey, but I did not make, and do not have, any such recordings.