NEXT:Joe Scarborough is Quitting the GOP
PREVIOUS:This TV Newser Is Giving a Reboot to The Washington Post's Video News 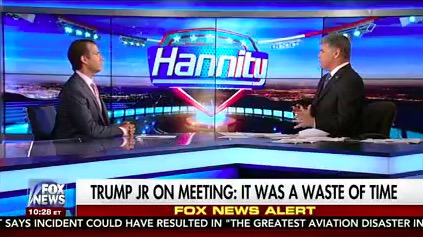 “For all the members of the destroy Trump media that have to tune into my show tonight, get out your pad and pen. You may actually learn a thing or two,” said Hannity, before spending several minutes summarizing what he believes are underreported stories involving Hillary Clinton, James Comey and “deep state leaks.”

After the 10-minute monologue, Hannity welcomed his guest, Donald Trump Jr. “I didn’t know there was any time left,” Trump joked before getting serious about the meeting he had with a Russian lawyer last June.

“In retrospect I probably would have done things a little differently,” Trump said. “For me this was opposition research, they had something you know maybe concrete evidence to all the stories I’d been hearing about. So I think I wanted to hear it out. But really it went nowhere and it was apparent that wasn’t what the meeting was about.”

“It was a waste of my time, which was a shame,” Trump Jr. said of the 20-minute meeting which he says he didn’t tell his father about.

At the start of the second segment with Trump Jr., Hannity played several clips from MSNBC and CNN about the story, then got Trump’s reaction to them.

“I think it’s a little bit ridiculous and overplayed,” said Trump Jr. “I think the media has really done themselves a disservice by taking sides so flagrantly.” 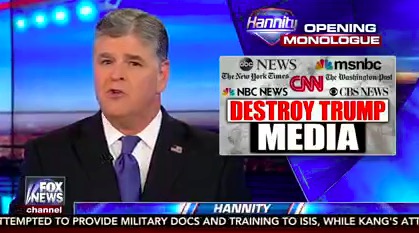 At the start of the third segment, Hannity said he wanted to ask every question he could think of “regarding this issue I can’t think of any more,” he said, so he came back around to critiquing the media.

“What is your reaction to the double standard?” Hannity asked Trump.

“The double standard is upsetting,” Trump said. “You see it everyday. I think the mainstream media has probably done themselves a pretty big disservice by going so far. By going so extreme. By being so sensational. It’s pushing regular people away,” Trump argued, not recognizing that cable news continues to set ratings records because of the non-stop news from his father’s administration. (Unless you consider those viewers not “regular people.”)