NEXT:Friday, Sept. 11 Scoreboard: Fox News Won Nearly Every Hour on 9/11
PREVIOUS:NBC's Miguel Almaguer: 'I’ve Never Seen Anything Like This Before in My Career' 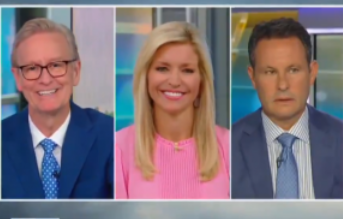 President Trump appeared on Fox & Friends this morning for what ended up being a 47-minute interview, and proclaimed that he will be appearing on the morning show every week going forward.

“If we can’t do Monday, then Tuesday … just like we did in the old days,” he said.

The co-hosts were apparently caught off guard by that statement. Co-host Steve Doocy clarified, saying that the network “has not committed to that,” and Trump’s appearances on this show “will be on a case-by-case basis.”

Doocy added: “And Joe Biden is welcome to join us for 47 minutes, like we just did with the president.”

Whoa. Steve Doocy concludes the interview by saying Trump “may want to do [an interview] every week, but Fox is not committed to that. We’re gonna take it on a case-by-case basis.” (Check out Brian Kilmeade’s body language as he says this!) pic.twitter.com/vEggQOsXF4

Before he ran for office, then-reality TV personality Donald Trump had his own weekly segment on Fox & Friends, “Monday Mornings with Trump.”

The late Fox News founder Roger Ailes introduced the segment in 2011. Trump would give his unique take on the news, and push his birtherism theory that then-president Barack Obama was not born in America.

The weekly call-in segment ended once Trump embarked on a serious run for the presidency.