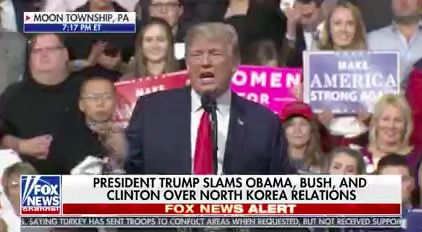 Pres. Trump was in his element tonight, stirring up a crowd at a rally for GOP candidate in a special congressional election in Pennsylvania.

When talking about what could be a historic breakthrough with North Korea, Trump went off script and was more interested in talking about how the media covered it.

Trump began by referencing an interview he’d done on Meet the Press nearly 20 years ago, when the topic of North Korea came up. “Did you ever see the story where, it’s 1999, I’m on Meet the Press, a show now headed by sleepy eyes Chuck Todd,” said Trump. “He’s a sleeping son of a bitch, I’ll tell you.”

The president then got to talking about the coverage Thursday night and into Friday about the proposed meeting with North Korean leader Kim Jong Un, which ended with his talking about his success hosting an NBC reality show.

“A certain anchor on CNN, fake as hell, CNN, the worst. Their ratings are lousy, by the way and compared to Fox, and a certain anchor, female, said, ‘This is really something. He would go down as a truly great president if this happened.’ They couldn’t believe it. CNN. MSNBC which is worse than — I think — MSNBC, third rate. And NBC, which is horrible. Their newscast by the way is not doing well on NBC network. They’re heading down the tubes.

I did The Apprentice on NBC for 14 seasons. I made a lot of money for them. We had a big, successful show. Arnold Schwarzenegger failed when he did The Apprentice and he’s a movie star. Martha Stewart failed. I kept chugging along, every year it was a big hit. I made them a lot of money, gave them good ratings when they were absolutely dying and they did nothing but kill me. NBC is perhaps worse than CNN. I have to tell you. MSNBC is horrible.”

And that was in the first 10 minutes of the rally.