NEXT:Hurricane Florence 8 p.m. Notes: 'Tonight, We're Seeing the First Casualties of This Powerful Storm'
PREVIOUS:Trop. Storm Florence Saturday, 8 p.m. Notes: 'This Is Incredible; The Center of Circulation Has Not Moved' 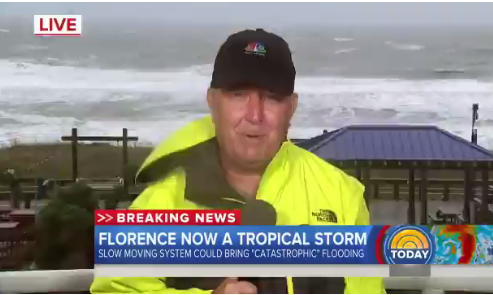 Downgraded to a tropical storm, as of 11 a.m. ET on Saturday, Sept. 15, Florence has taken the lives of at least 7, and moved inland into South Carolina. It’s roughly 40 miles west of Myrtle Beach, S.C., with maximum sustained winds of 45 mph (5 mph down from the 50 mph speed at 8 a.m. ET). Florence has almost come to a standstill, moving only 2 mph west.

According to the NOAA, Florence is crawling westward across eastern South Carolina, with heavy rains and catastrophic flooding and heavy flooding continuing across North and South Carolina. 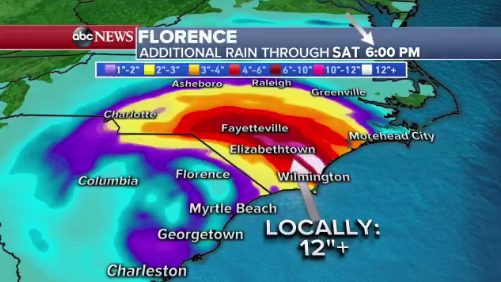 Co-hosted by Sheinelle Jones and Peter Alexander, NBC Weekend Today went on at 7 a.m. ET this morning will stay on until Noon ET.

Alexander said the entire ordeal seems reminiscent of Hurricane Wilma in Mexico, which lasted for 100 hours, and had only 2-3 mph movement during a significant chunk of that time.

.@craigmelvin is on the ground in Wilmington, NC, with the latest on #Florence and the damage it has left. pic.twitter.com/BF0OWOPdih

“The main concern in the coming days is that the main rivers could crest, cause catastrophic flooding and could even wash out the main road in and out of Myrtle Beach (she’s presumably talking about Route 17).

“No food trucks or fuel trucks could come in and out of Myrtle Beach,” added Leitner. “Keep in mind that 60 percent of the county evacuated, which means that none of the residents will be able to return to their homes.”

#Florence has parked itself near Myrtle Beach, SC, and @TammyLeitnerNBC is there on the scene with the latest. pic.twitter.com/R92sGYi3BZ

Haake is in New Bern, N.C., one of the hardest-hit towns so far, “overwhelmed with more than 10 feet of water.”

#Florence: New Bern, NC, has been one the hardest hit communities, leading to hundreds of rescues. @GarrettHaake reports. pic.twitter.com/gl5CcQRaez

Sanders is at Carolina Beach, N.C., where waves are giving the sand dunes a run for their money, and where most of the pier has been taken out due to the storm surge.

Fryer is in Jacksonville Beach, N.C., which has been hit with roughly 3 feet of water; and those floodwaters aren’t going anywhere anytime soon.

Forecasters warn of more than 3 ft. of rain in parts of Jacksonville, NC. @joefryer reports on Florence’s “catastrophic floods.” pic.twitter.com/8kTdXCyO1J

CBS This Morning: Saturday was hosted by the usual trio of Anthony Mason, Dana Jacobson and Michelle Miller.

CBS News’ Adriana Diaz followed a group of rescusers through 4 feet of water in Jacksonville, N.C. She added that there have been 30 rescues in Jacksonville along since 3 a.m.

Local residents waded through up to 4 feet of water to make sure no one was trapped in houses. @AdrianaSDiaz went along with them and filmed on her cell phone. pic.twitter.com/pmwggRKkoC

Ginger Zee, Amy Robach, Eva Pilgrim, and Tom Llamas were among the ABC Newsers still reporting from the ground; each reported for GMA Weekend.

Hey Wilmington: help is on the way… but I’m sure it will take a week or more for everyone to get power back. Serious rain in this outer band will make repairs nearly impossible today. pic.twitter.com/zUHRCSI0dj

The Weather Channel’s Mike Bettes is reporting this morning from Myrtle Beach. The network is not letting a viral video get in the way of its reporters doing their jobs:

Update on surge potential in Myrtle Beach from #Florence https://t.co/k9lyheVwD1

Stephanie Abrams up at all hours:

We’re here for you NC & SC no matter the conditions!!!! pic.twitter.com/ZkOvXiwGJ7

Heard of deer swimming in flood water in Jacksonville,NC! This is real, we have video if it too on @weatherchannel !!!!! pic.twitter.com/0BsKW3w6Jn