It’s Saturday night in the Carolinas, and Florence, now a tropical storm gusting less hard than she was earlier today, “is drifting westward over South Carolina…flash flooding and major river flooding occurring over a significant portion of the Carolinas.”

According to the NOAA, as of 8 p.m. ET on Saturday, the eye of Florence is now about 45 miles south, southwest of Florence, S.C. (yes, Tropical Storm Florence near Florence), and 65 miles east, southeast of Columbia S.C., where the University of South Carolina is located.

At 8 p.m., the maximum sustained winds are down to 45 mph, and the storm is only moving 2 mph. That’s really slow, as the National Weather Service tweeted:

Think about this for a moment…. The average walking speed is about 3.1mph. #Florence is moving approximately 2mph. As a result of the slow movement, Florence is producing heavy rain and flash floods. Turn Around Don’t Drown! #TADD https://t.co/KiHHnhMM4r pic.twitter.com/SgiRcrg0rq

The slower the storm is moving, the worse the flooding becomes. And that’s a problem, considering many news outlets are reporting that already 9-to-12 people are dead. That’s up from 7 casualties many outlets reported this morning.

An interesting moment from today’s coverage: CBS News’ Adriana Diaz was set to do a hit, when a herd of deer made their way down a nearby Jacksonville, N.C. street in head-deep water. “I hope they’re OK, they look like they’re swimming,” said Diaz.

One-by-one, thirteen stranded Florence victims in Jacksonville, N.C. were hoisted 40ft into the sky to safety.

Mark Strassmann flew with the Coast Guard as they responded to day two of flooding, carrying out daring rescues in places recovering from the devastating storm surge. pic.twitter.com/ek2kCcbior

“And at a neighborhood not far away, we saw people walking out of a Family Dollar store with arm fulls of goods,” said Leventhal. He went on to later cite a tweet from the Wilmington Police Department which said the store’s management “has asked not to intervene at this time.”

Leventhal also reported that power outages are across the town, the state and officials don’t know when people will be able to go home. “We’re hoping that flooding doesn’t get worse, but we’re hearing that it probably will,” Leventhal continued.

Florence has claimed the lives of at least 11 people; @RickLeventhal is in Wilmington, N.C. with the latest. #FoxReport https://t.co/PGq6TRyiel pic.twitter.com/o3OUBC7Vze

Both ABC and CBS aired college football games in the late afternoon, as is customary on Saturdays at this time of the year.  Each broke in with special reports during halftime.

Good afternoon, I’m Tom Llamas reporting from the storm zone in Myrtle Beach, South Carolina. What is now tropical storm Florence is wreaking havoc over the Carolinas. It extends over 350 miles, and as you can see and hear behind me, the downpours are endless. Three straight days of heavy wind a lot of rain at Snead’s Ferry. But the flood threat is getting worse. Further inland, neighborhoods under water. New evacuation orders issued today. Roads shut down between parts of two major interstates. Storm damage triggering evacuations, including these residents of a senior home.

It’s already claimed 8 lives and there are hundreds that need to be rescued. Victor Oquendo with that part of the story.

Oquendo: Jacksonville N.C. is underwater right now. At least 20 inches of rain have fallen and there’s no sign of this slowing down. Neighborhoods are flooded, and we’re seeing active search and rescue missions being carried out. Volunteers taking their boat out, trying to get to people trapped in the their homes. Folks are checking in on their businesses as well. The governor of North Carolina calling the flooding in his state “epic,” and says “the danger is not over yet and people need to shelter in place.” The storms and flash flood threats are on the move. Let’s get to Sam Champion tracking this today.

Champion: This is incredible. The center of circulation has not moved. Look at those rain bands. They’re carrying two to three inches of rain an hour. Just to show you how moisture that this, the little river in Fayetteville is forecast to jump 16 feet in just 24 hours…Eventually the storm will weaken and get kicked up into the mountains to places like Asheville, which could get 6 to 10 inches of rain. 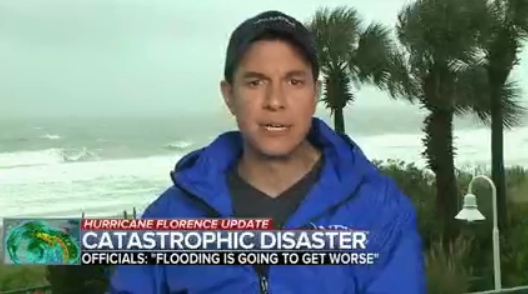 Jeff Glor broke in with a CBS News Special Report during halftime of LSU-Auburn, 5:30 p.m. ET.

The flood danger from Florence is intensifying. Another foot of rain could fall by tomorrow, coastal areas could end up with more than 3 feet. Cumberland county, put under mandatory evacuation orders. A mile over Cape Fear, the death toll has climbed to 9, three including a baby were killed by fallen trees as rescue teams continue to work… 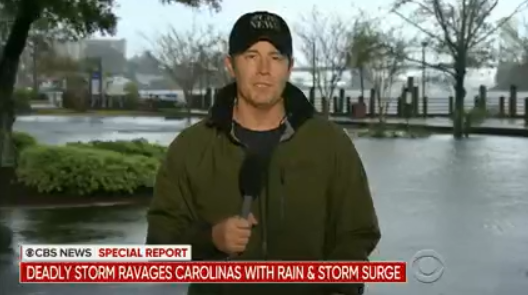 Good evening from Wilmington, along the Cape Fear River where it’s been raining for better than 48 hours, more than 30 inches have fallen in some parts of this state, and we could see 40 inches before all is said and done. This storm is sitting over us, barely moving, bringing dangerous flooding across the state today. The national guard tells me they are active in at least 10 counties. Florence already blamed for nine deaths and 800,000 are still without power. Our NBC correspondents are across the area. The governor’s stern warning, more water is on the way… 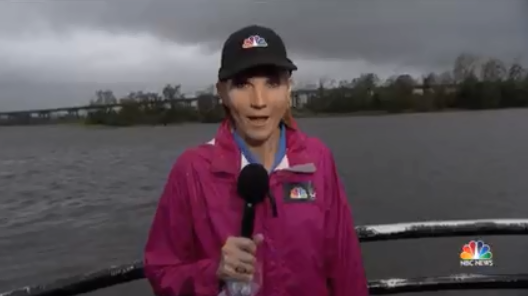 NBC News correspondent Garrett Haake joined the broadcast from New Bern. He said he used a drone earlier in the day to get to neighborhoods he previously wasn’t able to get to on foot. He found blocks of homes surrounded by water.