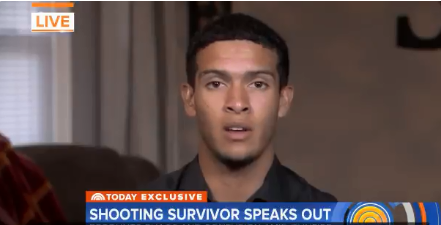 Savannah Guthrie and Willie Geist interviewed Anthony Messenger this morning on the Today show. Messenger is the Capital Gazette intern whose tweet pleading for help during yesterday’s deadly shooting went viral, and he’s still trying to digest what exactly transpired when the murderer entered the Annapolis, Md., newspaper’s newsroom with a shotgun and smoke grenades, killing 5 Capital Gazette staffers and seriously wounding others.

“That’s never something that crossed my mind when I took the internship — that I may see people die,” Messenger told Guthrie and Geist. “We had to pass two bodies of our colleagues, which was something that no one should have to stomach.”

Messenger — a rising senior at Salisbury University who started at the paper 4 weeks ago — also said the above tweet that went viral was not actually written by him, but by his colleague Selene San Felice. He had given her his phone so she could text her family and after she messaged her mom, Messenger said she sent the tweet that included the newspaper’s address.

He continued: “It’s unfortunate that someone would come into a place that only reports truthful stories that are fact-based and unleash hell on the office…”

All the victims were employees of the Capital Gazette: