NEXT:Stephanie Ruhle Will No Longer Appear on JPMorgan Chase-Branded Segments Amid Conflict of Interest Concerns
PREVIOUS:Here's Who Rocked Purple This Morning in Show of Support for LGBTQ Young People 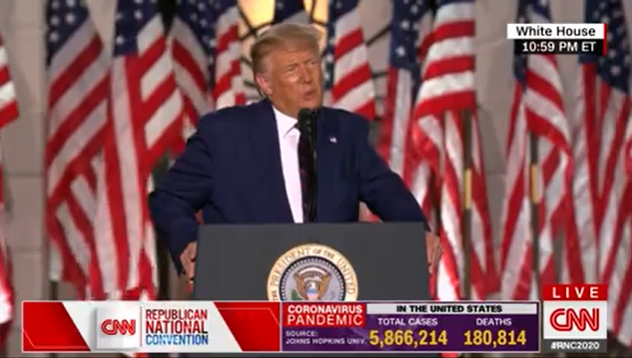 UPDATE (11:45 a.m. ET): In a statement to The Wall Street Journal, NBC News Group chairman Cesar Conde said: “We share in the frustration that our event will initially air alongside the first half of ABC’s broadcast with Vice President Biden. Our decision is motivated only by fairness, not business considerations.” He noted that NBC scheduled Mr. Trump at 8 p.m. because it had given the same slot to Mr. Biden in a previous town hall and it wanted to keep all things equal between the two candidates. Also, starting at 9 p.m. would still have conflicted with the ABC broadcast, which lasts for 90 minutes while NBC’s is an hourlong event. We hope voters will watch both discussions—ours will be available at any time, free and on-demand on YouTube, Peacock and all our digital news platforms.”

NBC News has caught a good deal of flak over the past 24 hours for scheduling a town hall with President Trump directly opposite ABC’s town hall with Joe Biden, an event that had been scheduled multiple days in advance.

The criticism of NBC’s move has mostly come from on-air news talent at other networks, media and people on Twitter.

As first reported by THR, more than 100 top showrunners, producers and stars have sent a petition to Comcast and NBCUniversal executives protesting the timing of tonight’s town hall with Trump, the former NBC employee-turned-commander-in-chief.

The list includes actors from NBC’s top shows, like Law and Order: SVU’s Mariska Hartigay and Chris Meloni, as well as with This Is Us creator Dan Fogelman and stars Sterling K. Brown, Mandy Moore and Milo Ventimiglia.

The petition—sent to Comcast CEO Brian Roberts, NBCUniversal chairman Jeff Shell and NBCUniversal News Group chairman Cesar Conde—told the execs, “you are enabling the president’s bad behavior while undercutting the Presidential Debate Commission and doing a disservice to the American public.” They continued: “This is not a partisan issue. This is about the political health of our democracy.” The group includes such current top NBC talent as Chris Meloni and This Is Us star Sterling K. Brown as well as heavyweights Aaron Sorkin, Greg Berlanti, Ryan Murphy and Seth MacFarlane.

We are a group of writers, actors, directors and producers. Many of us have been lucky enough to work for NBCUniversal at some point in our careers. Some of us are currently employed at your studio. We have always thought of NBCUniversal as both a terrific creative home and a brand that stands for the best in entertainment and broadcast journalism.

This is why we have been devastated to learn that you have chosen to air President Trump’s town hall this Thursday night at 8 p.m., directly opposite Vice President Biden’s town hall.

This is not a partisan issue. This is about the political health of our democracy.

We believe this kind of indifference to the norms and rules of our democracy are what have brought our country to this perilous state.

We are simply asking that NBC air the President’s town hall either before or after Vice President Biden’s so that American voters can have the opportunity to watch both.

We understand the necessities of business, especially in this difficult time. But we believe there are larger issues of civic responsibility at stake here.

An NBC Entertainment legend calling out her former network:

And Conan O’Brien joined the outrage, hilariously referencing his own 2010 exit from NBC’s The Tonight Show, when the network opted to reinstate Jay Leno as host.

I can’t remember the last time I was this shocked by an NBC programming decision.