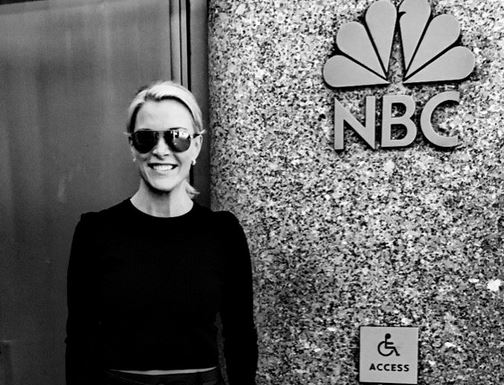 Megyn Kelly has crossed the street, literally, and is now an official NBC News employee.

Kelly, who spent 12 years at Fox News, signed with NBC News in January for an 8-figure annual salary where she will host a Sunday night newsmagazine debuting next month as well as a weekday mid-morning show, that we can now confirm will air at 9 a.m. ET, in place of Today’s Take. There had been a consideration of airing the show at 10 a.m. and moving Hoda Kotb and Kathie Lee Gifford to 9 a.m.

Kelly tweeted out this picture at NBC’s 30 Rockefeller Plaza headquarters, which is across the street from Fox News Channel’s 1211 Avenue of the Americas headquarters in Midtown Manhattan.

First day on the job @NBCNews! On the air in June, but had so much fun meeting new colleagues today. Grateful. Happy. pic.twitter.com/ervrTM3A8I