NEXT:Here Are the Top Cable News Advertisers for Q3 2018
PREVIOUS:David Gura Gets His Own Weekend Morning Show on MSNBC; PoliticsNation Moves From 8 a.m. to 5 p.m. 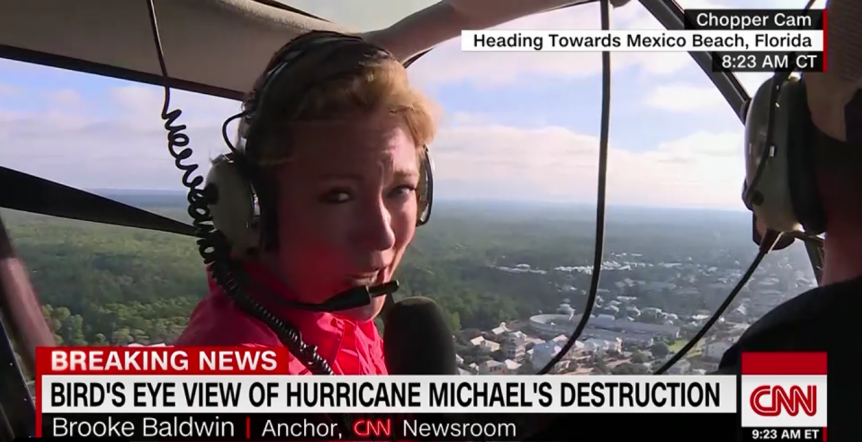 That was CNN anchor Brooke Baldwin‘s first reaction to flying in a helicopter over Mexico Beach, Fla.,  in the aftermath of Hurricane Michael. FEMA says Mexico Beach “took the brunt of the storm.”

We spoke with Baldwin Friday morning, less than 48 hours after the category 4 storm made landfall. She was making her way back to Mexico Beach from Panama City Beach, 30 miles to the west.

Baldwin and her team take us behind the scenes, of how they were able to get live aerial pictures of the decimated beach town Thursday.

TVNewser: Describe to us the scene right now in Mexico Beach. On television, it looks similar to parts of New Orleans in the days/weeks after Katrina.

Baldwin: Every single slice of the two-mile by three-mile seaside town is virtually obliterated. There are random condos and timeshares still standing, but I have never seen in my life the way a home can be carried from the 13-foot storm surge across Highway 98 and landing in someone’s front yard upside down. I saw that yesterday. I saw hot tubs thrown around. I think what’s really haunting was just walking around all the rubble and hearing smoke alarms that were parts of people homes. If you think about a smoke alarm, it’s in place to protect danger; so it was just an eerie combination of hearing these danger-detecting beeps amidst the aftermath of a category 4 hurricane. 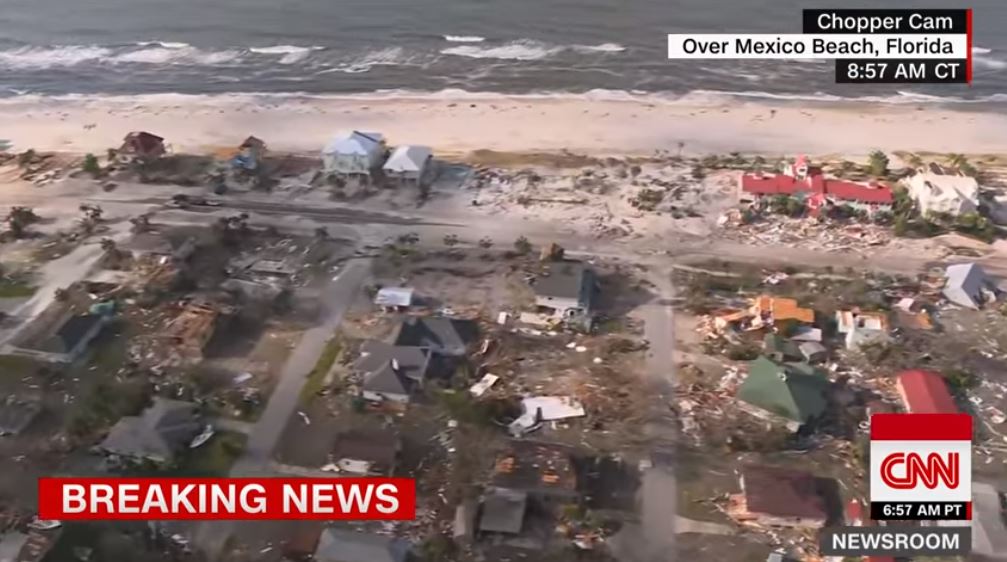 So how did you manage to snag that helicopter ride Thursday morning? Your coverage was unique in that CNN was able to show live aerials of Mexico Beach, something your competitors couldn’t do.

I knew the second we finished my show after we rode out the hurricane, that I wanted to go straight to the hardest hit area. And the challenge was then looking for that area; and it was all just a mess, with all the trees and power lines down. How close was I going to get into Mexico Beach? No one had gotten in yet. And so I basically showed up at the local airport in Destin, which is where I was after the hurricane; I guess it was the power of persuasion. Lovely southerners, and I’m southern. I started talking to the front desk at Destin Executive Airport and I said ‘we’re journalists, we want to tell the story of the area hardest hit.’ They were all into helping us out. They let us have their car, we rode down the tarmac to the helicopter hangar where we met this guy who told me he had a buddy who flies into Destin who happens to be in town and knows how to fly this particular kind of helicopter. So I jumped on the phone with this guy who was in town with his girlfriend; it was their last day of vacation, and I had to explain to him why it was really important for him to get out of bed and fly two CNN camera guys and myself 80 miles east down to Mexico Beach. His name is Alex and bless him, he did it. So that’s how we got up and got out.

Talk about the general production process because the cell towers are all down, right? How is all of this happening?

Once we landed, I felt like I was in a bubble all day. So what we had was a satellite phone so we could communicate back CNN HQ, and that’s how we were able to let people who had ridden the storm out contact their loved ones. We have what is called a BGAN (Broadband Global Area Network) which looks like two computers and we had battery power, and we hit the satellite, and that’s how we made it live. But the challenge too, was, we ended up being in Mexico Beach hours longer than we were planning to, and we were running out of battery. There was a guy who rode the storm out in Mexico Beach who had a truck with a quarter tank of gas and was good enough to keep his truck running so that we could connect our computer battery to his truck battery to fire up our computer to then hit the satellite with the BGAN, so that I could go live on that bridge in Mexico Beach. 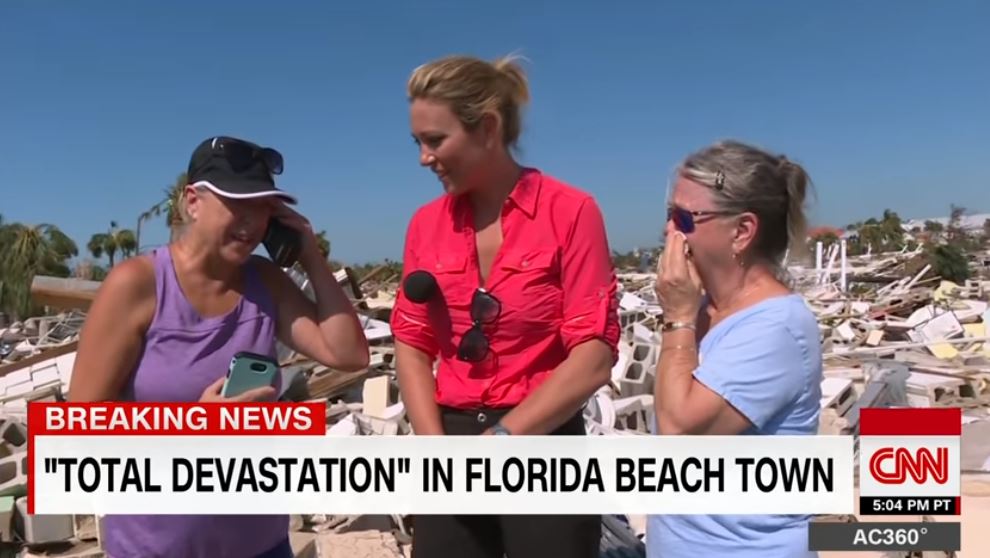 You’re a journalist, but you’re also a human being. How are you able to separate the two right now?

I think it’s important not to separate the two. It’s important to stay a human, to be a journalist, to be a human covering the stories and trying as best as I can to put myself in their shoes, to be respectful, to just listen. I think the biggest thing was just the fact that we’re there on the ground, and we’re able to bring these pictures to everyone. I’ve heard from people who have loved ones in Mexico Beach and to be able to help people know if others are OK and what the situation is like. Honestly, the highlight of my day was being able to hand our satellite phone to those from Mexico Beach for the first time to tell their younger brothers, or their daughters, or their sisters that they’re OK.

There wasn’t a dry eye.