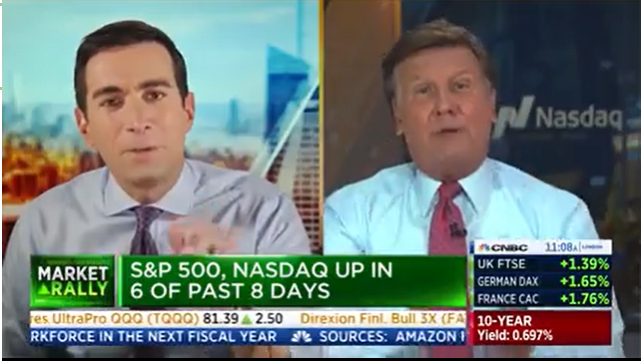 Squawk Box co-hosts Andrew Ross Sorkin and Joe Kernen oftentimes don’t see eye-to-eye on the issues, though we rarely see the back-and-forth get as contentious as it did this morning.

With Becky Quick stuck in the middle, Sorkin and Kernen got in a heated debate just five minutes into today’s broadcast of Squawk Box concerning the recent market rally (the Dow is currently at its highest point since March 10), with Sorkin later accusing Kernen of not caring about the 100,000+ deaths from Covid-19 and more generally just being in the tank for President Trump.

Kernen initially accused Sorkin of being overly pessimistic about the rally, and wondering aloud why he seemed to be going out of his way to find negative market indicators. Sorkin responded by saying that “a lot of smart people” are wondering how the market could be so high despite the devastating impact Covid-19 has had on the economy.

“Why is that the smart people?! They’ve been wrong for 35%!” Kernen said—referring to the gains the Dow has made since reaching its low of 18,213 on March 23. “Why are they smart?! Just because they can see what’s right in front of their nose?! That doesn’t make them smart! It makes them not savvy about the market!”

Kernen tried to respond, but Sorkin wasn’t done, and raised his voice even more. “Hold on! Hold on! Hold on! I’m not going to do this with you, Joe!” Sorkin said. He conceded he doesn’t know whether he’s right or wrong, but that the questions that investors are posing are valid.

The debate basically went off the rails after that, as Kernen referenced a moment from Tuesday’s broadcast in which he said Sorkin yelled, and added, “You just yelled again!”

Kernen went on to outline what he perceives as an overreaction by Sorkin to the Covid-19 pandemic, despite 100,000+ deaths to date.

That statement set Sorkin off.

Kernen described Sorkin’s accusations as “totally unfair,” saying, “I’m just trying to help investors keep their cool, keep their heads and as it turned out that’s what they should have done,” he said.