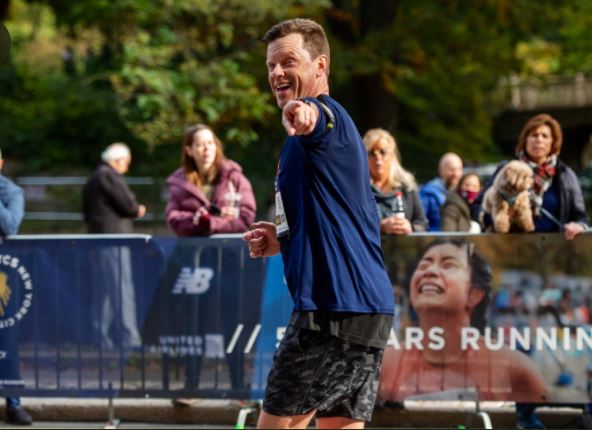 Geist, the MSNBC Morning Joe co-host and NBC Sunday Today host, accomplished an impressive feat by breaking the four-hour mark in what was his first full 26.2 mile marathon ever. Geist said that he raised nearly $300,000 for the Michael J. Fox foundation. It’s a cause close to his heart. Geist’s father, longtime CBS Sunday Morning journalist Bill Geist, has suffered from Parkinson’s for years.

WE DID IT! An absolute thrill to run 26.2 miles through all five boroughs today at the biggest party in New York.

Those crowds willed me to a 3:58 in my first marathon and raised nearly $300K for @MichaelJFoxOrg!

He also got an unexpected visit from his colleague Stephanie Ruhle.

I didn’t plan to jump the barrier when @williegeist made his way up 1st Ave, but watching New Jersey’s favorite son dominate #NYCMarathon2021 was like seeing Springsteen at @thestonepony pic.twitter.com/F3IyGMcjla

Not to be outdone, Geist’s NBC colleague Bill Karins, an experienced marathon runner, finished this year’s marathon in an impressive 3 hours and 38 minutes, easily his best performance to-date.

If you spend time doing something you might as well get better at it! 🏃‍♀️🗽🍎

An ABC News correspondent, Will Reeve raised an impressive $400,000 for the Christopher and Dana Reeve foundation in 2021. The last time Reeve ran the marathon (2016), he raised around $42,000. Quite an achievement.

Reeve, 29, was just three years old when his father, best known for playing Superman, was paralyzed in 1995, and was only 11 when the actor died in 2004. Two years later, his mother Dana Reeve died of lung cancer at the age of 44.

Here’s Reeve talking about his performance and money raised Monday morning on GMA.

A general assignment reporter for Spectrum NY1, Alyssa Paolicelli completed the marathon in four hours, 22 minutes. This was the reporter’s first NYC marathon.

I had the best day running my first #TCSNYCMarathon yesterday! This race has been a goal of mine since I was a kid who grew up along the route. It was more amazing than I ever imagined. Thank you to my family, friends,colleagues & strangers out there who made it so special! pic.twitter.com/rcLj4PuZDI

She receives a lot of support from her NY1 colleagues:

Got a little excited to see @APaolicelli17 before mile 12 in Williamsburg! #TCSNYCMarathon pic.twitter.com/KHs7PB0f84

Hey we caught up with @APaolicelli17 on the @nycmarathon route in Yorkville! Go Alyssa!!!!!!! @NY1 #NYCMarathon #NYC @nyrr pic.twitter.com/tvOI8xofsR

Fox Business host Cheryl Casone also ran in this year’s NYC marathon, her fifth! She completed this year’s race in five hours and 55 minutes, which is 15 minutes better than her 2019 performance.