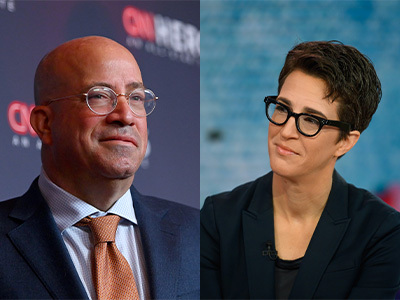 2021 is a unique year for the television news business. Networks had to adjust to covering a new (and very different) White House, while continuing to deal with the coronavirus pandemic. ABC News and CBS News appointed new presidents in spring of this year and CBS rebranded its morning show with a new co-host and a new studio right after Labor Day.

2021 was also a big year for streaming news. NBC News built up its streaming service, NBC News Now, adding ABC World News Tonight Weekend anchor Tom Llamas to the team and giving him his own primetime show on the service.

In addition to announcing the launch of CNN+, CNN shocked the industry by firing its top-rated host in primetime Chris Cuomo. Brian Williams signed off from MSNBC and NBC News in mid-December, and it appears Rachel Maddow will be winding down her long run as host of MSNBC’s 9 p.m. hour early next year (but she’ll remain with NBCUniversal).

Those are just a few of the major changes that transpired in the news business in 2020, and to mark the end of the year, we decided to compile a list of the 10-most-viewed stories on TVNewser published in 2021.

The most-read story from last year was: Here Are Final Ratings for the 2020 DNC and the 2020 RNC. The 2020 Democratic National Convention attracted a larger total audience across television news than the Republican National Convention. According to live-plus-same-day data from Nielsen, the four-day 2020 virtual DNC averaged 21.6 million total viewers across four nights, whereas the four-day RNC averaged 19.4 million total viewers per night.

But moving to present-day—some of the top 10 finishers for 2021 could make sense to you, while others could surprise you.

Some of the top posts from this year are of the Scoreboard variety, but we have decided to exclude overnight, weekly, monthly and quarterly ratings stories from this particular top 10, as well as stories published prior to this year.

10. Here Are CNN’s Options to Replace Chris Cuomo at 9 PM

Two of the most-read stories on TVNewser in 2021 had to do with CNN’s decision to suspend and eventually fire Chris Cuomo. The network fired Cuomo in December after retaining an outside law firm to review information about exactly how the host of Cuomo Primetime assisted his brother, former New York Gov. Andrew Cuomo, when the then-governor was accused of sexual misconduct.

CNN Worldwide president Jeff Zucker reportedly addressed Cuomo’s exit during a call with staff the Monday after his firing, adding that the network hasn’t decided on how it will fill the hour, “beyond this week, and we’ll begin to think about that soon.”

Michael Smerconish has been guest-hosting 9 p.m. in the meantime.

In the story above, we outlined some options on how the network could go about filling the 9 p.m. hour, and asked readers to cast their vote on who they think could take over timeslot on a permanent basis. Click on the link above to vote (if you haven’t already!).

9. Where Will Brian Williams Go After Leaving MSNBC? Here Are His Most Likely Landing Spots

In addition to our coverage of breaking news, TVNewser readers were interested in our analysis of the news business this year, including what MSNBC host Brian Williams might be up to next. One of the best-known personalities in TV news over the past 25 years, Williams announced in November he would be leaving NBC News after 28 years at the company when his current contract runs out at the end of the year. Williams says he’ll be taking some time off, but that he’ll return to media in some capacity in the future. We speculated CBS, ABC, CNN+ and podcasting as possible next steps for the longtime newsman. We’re interested to learn where he ends up next, and it appears you are too.

Reporting news about news concerning your employer is never an easy task; and it’s even more difficult when it concerns a longtime colleague and friend. That’s what Anderson Cooper had to do on-air weeks ago, when CNN announced that it had decided to suspend Chris Cuomo indefinitely after New York Attorney General Tish James released additional details—transcripts and exhibits—concerning the CNN newser’s defense of his brother New York Gov. Andrew Cuomo amid the state’s investigation into allegations against the former governor.

Cooper: “It [the news about CNN] involves Chris Cuomo, the host of Cuomo Primetime. New documents released this week indicated that Chris was more intimately involved than previously known in helping his brother, former New York governor Andrew Cuomo, craft a defense amid a flurry of sexual misconduct allegations.”

Cooper then read a statement from a CNN spokesperson, and threw to commercial.

CNN’s Brian Stelter reported back in March that “Earlier this year tensions between George Stephanopoulos and David Muir boiled over to the point that Stephanopoulos threatened to walk to a rival network, according to sources close to the matter.”

At issue, according to Stelter, was a title, “chief anchor,” at ABC News, and a key network news responsibility: leading special coverage of breaking news stories and special events.

Stephanopoulos, co-anchor of GMA and moderator of the network’s Sunday show This Week, had breaking news coverage responsibilities and the title of “chief anchor” for the better part of a decade. But that changed and Muir leads breaking news coverage for ABC, while maintaining the role of anchor and managing editor of ABC World News Tonight. The “chief anchor” title has been scrapped altogether.

The lead anchor responsibilities and who would handle them had become an issue at the network in late 2020-early ’21; so much so that according to Stelter, the matter bypassed ABC News president James Goldston, and Disney executive chairman Bob Iger had to fly from L.A. to New York “to broker peace” between the two camps.

Muir now has the responsibility his fellow evening news anchors have of leading ABC’s special news event coverage, while Stephanopoulos remains GMA co-anchor, This Week anchor, now has his own in-house production company and is producing four prime time specials for ABC each year. Stephanopoulos has also created special programs for Disney-owned platforms like Hulu.

6. Lester Holt and His Producer Kim Cornett on Why Their 21-Year Partnership Has Been So Successful

This story featuring NBC Nightly News anchor Lester Holt and his longtime anchor producer Kim Cornett kicked off a new recurring TVNewser feature called The Producer I Can’t Live Without, in which high-profile TV newsers and their longtime producers speak about their successful partnerships. Holt and Cornett told us about their longstanding working relationship (they first joined forces in 2000 when Holt was at MSNBC), why they think their relationship been so successful, their most memorable day working together, and much more.

TVNewser readers flocked to this story, as it was one of our most-read in 2021.

Back in January, ABC News chief political analyst and special correspondent Matthew Dowd announced he was leaving the network after a 13-year run.

Dowd, a staple on ABC’s Sunday show This Week and the network’s election coverage, was the chief strategist for the Bush-Cheney ’04 presidential campaign before joining ABC News in December 2007 as a political contributor. He was elevated to the role of ABC News special correspondent in February 2013, and was later named the network’s chief political analyst.

While Dowd is no longer an ABC newser, he continues to appear on television news programming, providing political insights on CNN and MSNBC.

TVNewser readers were very interested to learn the news of Dowd’s exit from ABC, as it was one of our most-read stories for 2021.

One of the most significant yet somehow least-talked-about on-air talent moves of 2021 was Tom Llamas leaving ABC for NBC News to become the network’s senior national correspondent and anchor a new daily, prime time newscast on the network’s streaming news channel NBC News Now.

He has also served as a fill-in anchor on Today show and has backed up Lester Holt on NBC Nightly News.

Llamas spent 14 years at NBC News—both at the local and national levels—before making the move to ABC News in fall of 2014.   During his first stint at NBC, he had been an investigative reporter and anchor of the 5 p.m. news at NBC 4 New York (WNBC), as well as a contributing correspondent for NBC News.

3. The Five’s Lead Exec Megan Albano on the Show’s Stunning Ratings Ascent to No. 1

Tucker Carlson attracts a ton of attention these days (and understandably so). However, Fox’s 5 p.m. panel talk news show The Five gained a ton of momentum on the ratings front in the spring—and continued to rise up the cable news rankings through the summer. The Five then proceeded to finish the month of Oct. ’21 as the most-watched show in cable news. The show had never finished a calendar month as the most-watched show on cable news prior to Oct. 2021.

We spoke with Fox News vp of weekend primetime and The Five Megan Albano in October, and she provided us with her thoughts on the show’s historic ascent to No. 1, navigating host exits, knowing when to tell the co-hosts to pull back a bit, as well as who could become the permanent replacement for Juan Williams, the show’s most-recent liberal co-host who left the program right before Memorial Day.

The program still hasn’t named a permanent replacement for Williams.

A LOT of you were interested in what Albano had to say, as this Q&A was one of TVNewser’s most-read stories for 2021.

Alisyn Camerota had been a staple of morning cable news up until April of this year. She signed off from CNN New Day in April, moving to the network’s 2-4 p.m. time period, which she now co-anchors with Victor Blackwell.

Morning TV is tough, and Camerota was ready for a change. She called New Day her TV home for more than six years, having joined the program in Jan. 2015. Before arriving at CNN in July 2014, Camerota spent 16 years at Fox News, first as a co-host on Fox & Friends Weekend and then as co-anchor on America’s News Headquarters, before jumping to CNN in March 2014.

A story connecting Rachel Maddow and Jeff Zucker is sure to attract attention—and this one certainly did in 2021.

Puck News’ Matt Beloni, citing a source, reported in November that the CNN Worldwide chief offered the MSNBC legend around $20 million a year to anchor the soon-to-launch CNN+ streaming service.

CNN’s attempt to lure Maddow apparently caused NBCUniversal “to scramble to promise her more money and less work to stay put, which she did,” Beloni wrote in his What I’m Hearing… newsletter.

CNN confirmed that Zucker tried to get Maddow specifically for CNN+, but the network did not confirm the $20 million a year figure.

Maddow’s new contract with NBCU (announced in August) reportedly puts her at around $30 million per year, through the 2024 election. She will reportedly wind down her nightly duties as host of MSNBC’s 9 p.m. hour as part of this new deal and produce content on myriad NBCUniversal platforms.

This story linking Zucker, Maddow and CNN+ was the most-read post on TVNewser for 2021.