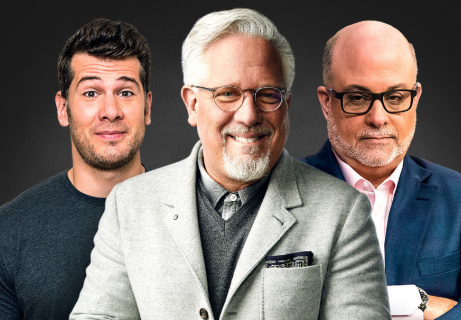 According to a press release from the company, Blaze Media will have a monthly multi-platform reach of over 165 million people, and will be the largest independent, traditionally conservative multiplatform media company in the United States.

“The combination of the exceptional roster of TheBlaze and CRTV talent means Blaze Media will now be as broad and ideologically diverse as the audiences we serve,” Beck said in a press release. “Conservatives, libertarians, constitutionalists, and more have a home at Blaze Media. Our hosts will have differences, but we share a common belief in free expression, honest discourse and a society founded in the principles of the Bill of Rights. I’m beyond thrilled about this merger.”

According to Levin, the face of CRTV and a Fox News host, the decision for the merger was made by the principals of CRTV and TheBlaze, not he and Beck themselves.  Also, the headquarters will not be in Dallas (though he did not say where the brand would be headquarted), where TheBlaze is presently based.

TheBlaze and CRTV have competed against each other and for the same type of consumer for years, offering readers and viewers a similar product. Each company featured an on-demand video library of daily shows from conservatives. Both companies also ran websites on which writers posted conservative commentary and news. Now united, Blaze Media will be perhaps the largest provider of on-demand conservative media content on the Internet (though Fox Nation may have something to say about that).

Michelle Malkin, a CRTV vet, apparently won’t be part of the new company.

I am so proud of the investigative journalism I did for #CRTV — so many heroes, so many compelling stories. I will not be continuing with the company, but wish my colleagues all the best.

Subscribers to CRTV and TheBlaze Premium will have access to the digital streaming content of both CRTV and TheBlaze talent, including over 30 original shows. Blaze Media’s programming lineup will include The Glenn Beck Program, LevinTV, Louder with Crowder, The News and Why it Matters, and America, hosted by Eric Bolling. The merger will also allow Blaze Media to expand its lineup of linear TV programming in 2019.

One name not mentioned in the press release is that of Bill O’Reilly. The former Fox News powerhouse host, who departed the network in April 2017 after a report surfaced that he and Fox News paid $13 million to five women who accused the star of harassment. gave his first post-Fox interview to Beck and The Blaze just weeks later. Beck asked O’Reilly if he’d like to join the company, with the interviewee evading the question (though didn’t officially say no) saying, “Aren’t you going to ask me about my book?”

The right-wing cable and digital media company—founded by Beck shortly before he exited Fox News in 2011—TheBlaze had been struggling, and looking for a company to merge with for a while now. This was amplified by a June report in The Daily Beast saying that the company was forced to make yet another round of staff cuts, already having done so the previous year.

TheBlaze had lost major personalities, including Dana Loesch and Tomi Lahren, who is featured on Fox Nation, Fox News’ new OTT service. The media company had previously been in talks with Ben Shapiro over merging with The Daily Wire, although that fell through. Beck said over the last 12 months, TheBlaze has been profitable although it was in debt in the past.