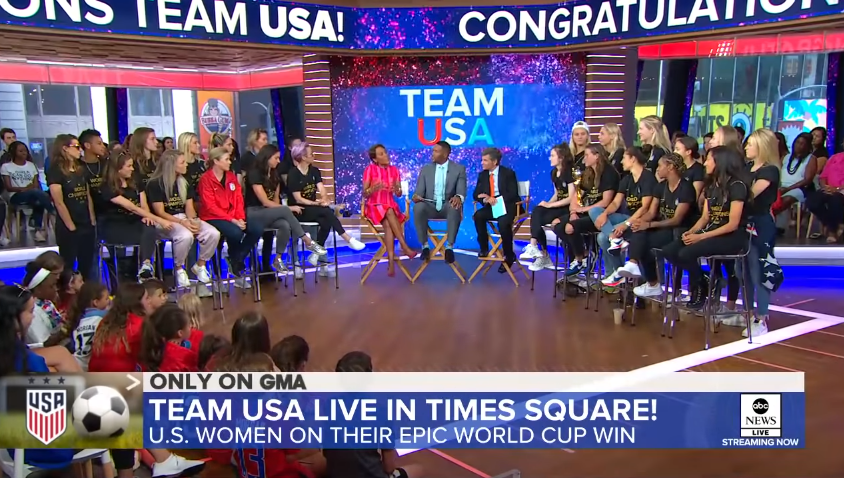 The U.S. women’s national team has become the talk of America–and understandably so–after earning their fourth World Cup title with a hard fought victory on Sunday over the Netherlands.

The team has embarked on a media tour since coming back to the States. The entire squad appeared on GMA Tuesday morning while two of its stars, Megan Rapinoe and Alex Morgan, also sat down with ESPN’s Jeremy Schaap in the network’s New York studio.

Morgan just so happens to be on the cover of this week’s print edition of Adweek, which is celebrating the most powerful women in sports.

Here’s the team’s appearance on GMA:

The footballers were also honored this morning with a ticker tape parade up the iconic Canyon of Heroes in Lower Manhattan; an event which attracted thousands of passionate fans.

New York Mayor (and Democratic party presidential candidate) Bill de Blasio rode on one of the floats with the players, and gave them keys to the city.

GMA co-anchor Robin Roberts then emceed the post-parade ceremony at City Hall, and introduced each player to the crowd.

The champions came out to more deafening cheers, and held hands with young soccer players as the DJ Khaled track All I Do Is Win blasted on loudspeakers.

U.S. Soccer Federation president Carlos Cordeiro was one of the figures who addressed the crowd, remarking, “We believe at U.S. Soccer that all female athletes deserve fair and equitable pay. And together, I believe we can get this done.”

This topic of pay equity became a hot topic during the tournament and remains one.

Longtime U.S. women’s team star Carli Lloyd and Morgan addressed the crowd, as did Rapinoe, who has become the team’s de-facto spokesperson as well as a polarizing personality in recent days and weeks.

“This is crazy. This is absolutely insane. Such a loss for words,” Rapinoe said, before adding, “I mean, I’ll find them, don’t worry.”

Rapinoe spoke about the team’s diversity during the event: “We have pink hair and purple hair. We have tattoos, dreadlocks. We’ve got white girls and black girls, and everything in between,” adding, “This group is so resilient, is so tough, has such a sense of humor—is just so bad-ass.”

The American soccer star had been making headlines in recent days for a Twitter feud with President Trump.

Some have praised her criticisms of the president while others have condemned them (sums up America in 2019, I guess).

Rapinoe sat down with Anderson Cooper and later Rachel Maddow last night to give her side of the story, with both networks deeming their respective interviews with her, “an exclusive.”