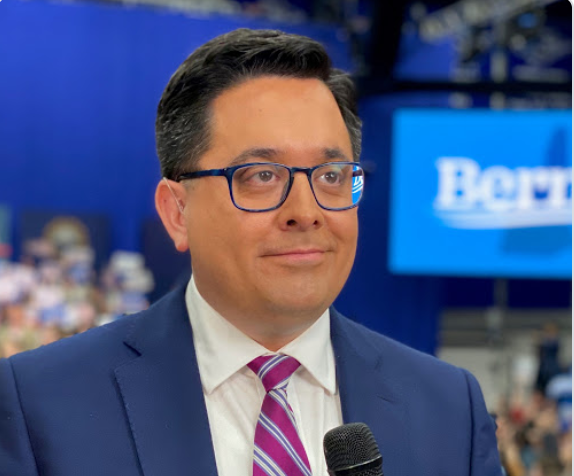 From January through October 2020, TVNewser is speaking with veteran political reporters from across the TV news spectrum about their presidential election memories.

Next up, CBS News’ Ed O’Keefe, who joined CBSNews in 2018 after 13 years covering politics for the Washington Post.

We caught up with O’Keefe recently to get his memories of past presidential election coverage, his thoughts on the upcoming Super Tuesday, and how social media has changed election coverage.

He also provided us with a fun anecdote about the late, legendary Washington Post political journalist David Broder, a man he considers a mentor.

Give us an interesting anecdote from the first presidential election you covered.

During the 2008 presidential cycle I was The Washington Post’s first-ever multiplatform reporter, documenting candidates with a video camera and audio for our daily politics podcast and a laptop for blog entries. It was futuristic then, but now it’s the norm.

I vividly remember traveling with the late [Washington Post political journalist] David Broder. One of my editors had the good sense to pair us up and I shot video while he conducted interviews for his widely-read columns on the views of swing voters.

Broder would identify a swing zip code within the swing precinct of the swing county in a swing state and would try to speak with up to two dozen likely voters before drawing any conclusions. It was meticulous work that over his decades of reporting set the standard for how reporters today account for the views of voters.

Broder eagerly invited me along to cover his last presidential campaign at a time when many of his colleagues were still strongly resistant to doing “web-first” reporting. That “The Dean” of the national political press corps allowed a twenty-something to witness and observe his work meant the world to me.

I learned three lessons I try to adhere to today: 1.) Reporters don’t “talk to voters,” we listen — and should listen and observe voters closely and not just in early primary or swing states. 2.) We shouldn’t be afraid to try new things or report our work on new platforms. 3.) Those of us fortunate enough to earn top jobs should be looking for ways to bring the next generation of journalists along for the ride.

How about an interesting story from a past Super Tuesday?

No specific Super Tuesday memory, but for me, every Tuesday in an election year is super. What I remember most are historic election night victories and humbling losses.

On Nov. 4, 2008 I was in Chicago’s Grant Park when Barack Obama won the presidency — I’ll never forget that. But on Feb. 20, 2016 I was also at the Hilton Hotel in Columbia, South Carolina when Jeb Bush placed fourth in the primary and ended his presidential bid. He’d spent a week in the state, knowing it was nearly over. After his brief remarks, he shook hands, gave and received hugs and with tears in his own eyes, he consoled staffers and supporters. It was a humiliating and humbling night for him — but he handled it with grace and dignity.

The lessons from Broder, but also this: As a national political journalist for an organization like CBS News, you don’t assume, surmise, predict or serve as a pundit. We report facts and explain the tricky rules and absurd traditions of electing an American president as succinctly as possible to the masses. Keep the opinions out of it and expect the unexpected every day.

It means more work! But it is also the primary way candidates are reaching voters and donors, so it is essential to understanding a candidate and the depth and breadth of their operation.

I can’t name one! I admire so many. Most especially these days the 2020 campaign reporters at CBS News and the producers who work with us. They are current and future stars, amazing, hard-working people.

But I’m also especially encouraged to finally see more fellow Latino journalists on the trail. It feels like this is the year where we’re no longer the exception but more of the norm. I rely on the dispatches of Time Magazine’s Lissandra Villa and Adrian Carrasquillo at Mediaite, the scoops of Politico’s Laura Barron-Lopez, the heartland perspective of BuzzFeed’s Henry Gomez and how Patricia Mazzei of The New York Times has Florida wired. On television, it’s always great to see someone like Bryan Llenas at Fox News, and report on the trail alongside ABC’s Tom Llamas or CNN’s Leyla Santiago, or to know that [Noticias Telemundo anchor] Jose Diaz-Balart or [Univision Noticias anchor] Jorge Ramos is going to be interviewing a candidate — so long as I’ve already interviewed that candidate.

Two places from Iowa — a state where eating is a joy. Wednesday is Spaghetti and Meatball night at Clyde’s Fine Diner in Des Moines and I loved it. (I know Dana Bash did, too.) But Vino’s Ristorante and R.G. Books Lounge in Cedar Rapids was a random and memorable find by CBS’s Musadiq Bidar.