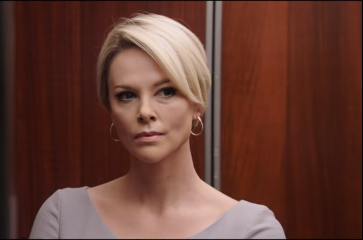 The one-minute, 25-second official teaser for Bombshell, Lionsgate’s new film about the downfall of Roger Ailes at Fox News, is out.

(You can also briefly see Kate McKinnon seated at a desk in the newsroom, presumably playing a PA).

John Lithgow will portray the beleaguered Fox News founder and CEO in the film.

Jay Roach is directing Bombshell, with The Big Short writer, Charles Randolph penning the script. Theron has also signed on as a producer.

Bombshell is slated to be released on Dec. 20.

Lithgow isn’t the only A-lister portraying Ailes on the screen these days. Russell Crowe has starred as Ailes in the Showtime series, The Loudest Voice in the Room, which is an adaptation of Gabe Sherman‘s best-selling book of the same name.

Roger Ailes resigned from Fox in disgrace in July 2016 weeks after Carlson filed a sexual harassment lawsuit against Ailes, which he called “false” and “defamatory.” Ailes died in May 2017 at the age of 77.