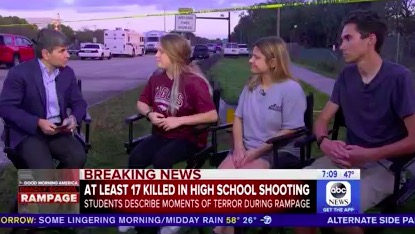 The network morning shows all led with the deadly school shooting at Marjory Stoneman Douglas High School in Parkland, Fla. Wednesday. That includes the all too common reports on what happened, who the killer is, and first-hand accounts from those who lived through it.

George Stephanopoulos, who anchored ABC’s coverage Wednesday afternoon, is in Broward County for Good Morning America. He spoke with David Hogg, one of the students who documented he shooting on his smartphone and via social media. “This is something that we can’t let keep happening because if we do and we get used to it, it’s gonna happen again,” Hogg said.

Florida shooting survivor praises school response but warns "this is something that people cannot get used to." https://t.co/WwOEHZxy9q pic.twitter.com/Yxf6afye6e

Stephanopoulos also talked with another student, Connor King, in the 7:30 half hour.

Jeff Glor is live in Broward County for CBS, where he interviewed one of the school’s math teachers who protected his class from the gunman.

Anchoring from South Korea, the Today show’s Savannah Guthrie and Hoda Kotb talked with injured student Samantha Grady. As she was getting medical attention late yesterday at the hospital, she was told to keep talking through what happened–with her parents, friends, anyone–because reliving it can alleviate nightmares. “I don’t want  nightmares,” Grady said.

“I freely talked about it because I don’t want nightmares.” Florida shooting survivor Samantha Grady on discussing the shooting with her family pic.twitter.com/8aeaZkCMyN

And we’ve seen these kinds of interview before, quite often, actually. Just go back 19 years to the school shooting at Columbine and this Katie Couric interview with survivor Craig Scott and the father of Isaiah Shoels, who died that day.