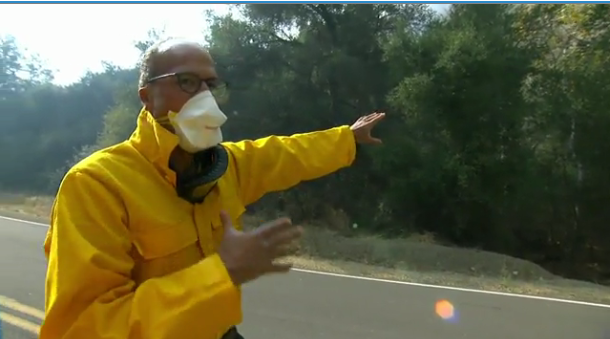 The NBC Nightly News with Lester Holt is shaking things up a bit these days. Its executive producer Sam Singal stepped down from the program at the end of last month, with Jenn Suozzo taking over as interim ep. Now, the evening newscast is launching a new ad campaign, moving away from the more sentimental promo, highlighted by the “Sometimes, it’s nice to see all the good out there” narration, towards something a bit bolder, more fast-paced and action-packed.

As Holt told us in an in-depth interview earlier this year, “when I started in the business, we had a 24-hour news cycle. Now, maybe it’s a two-hour news cycle…”

The new ad campaign debuts tonight, and gives a taste of the pace Holt was talking about.

In the 30-second promo shown below, you’ll see jump-cut images of Holt out in the field. He’s shown talking to a pilot on an aircraft; walking while covering California wildfires; and footage from the news-making interview with Pres. Trump from May 2017, where he admits to firing former FBI director James Comey because of the Russia investigation. During the promo, NBC News correspondents Hallie Jackson, Kristen Welker, and Richard Engel are among those who also shown at work in the field and from the White House briefing room.

Words are shown over the scenes tell viewers they “get the story….as if you were there, and the new slogan is: “The story told Nightly.”

Variety’s Brian Steinberg reports that NBC News has added several new end segments to the program since Suozzo took the reins from Singal. There’s now “Snapshot,” which looks at how everyday Americans are leading their lives; a Thursday segment known as “Spotlight” that looks at celebrities and pop culture of the moment; and a Friday segment called “Above and Beyond” highlighting people who rose to a moment or went the extra mile.

Why all of these changes? While NBC Nightly News remains the No. 1 evening newscast among adults 25-54, the demo coveted by TV news advertisers,  as we report each week, the newscast has been posting slight audience declines vs. 2017, and slipped to second behind ABC World News Tonight with David Muir in total viewers.

In fact, the ABC evening newscast has been No. 1 in total viewers for 26 consecutive weeks.

Nightly News used to dominate its ABC evening news counterpart across the board, ratings-wise. That’s not quite the case anymore.

Now is as good a time as ever to spice things up.