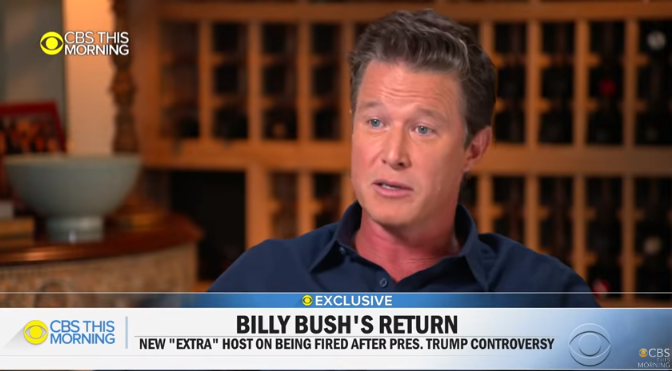 Gayle King interviewed the new host of Extra, Billy Bush about his return to television. It has been nearly three years since Bush left NBC after the notorious 2005 Access Hollywood tape with Donald Trump was leaked.

The video, which revealed how Bush laughed along while Trump was caught on a hot mic bragging about grabbing women “by the pussy,” was leaked to the Washington Post in October 2016. Most thought the release of the tape would end Trump’s bid to become president. That, obviously, didn’t happen. Bush on the other hand, was  suspended by NBC and then departed Today not long after the leak.

Bush said during the interview with King, which aired today on CBS This Morning, that he wasn’t prepared for the fallout of the release of the tape, and claimed that NBC executives had already known about the tape, which is similar to what he told The Hollywood Reporter in May 2017.

“I got taken out, but I wasn’t the target,” Bush told King. Bush also told King that he expected to keep his job at NBC News, even in light of the leak.

Bush makes his debut as the host of Extra tonight.