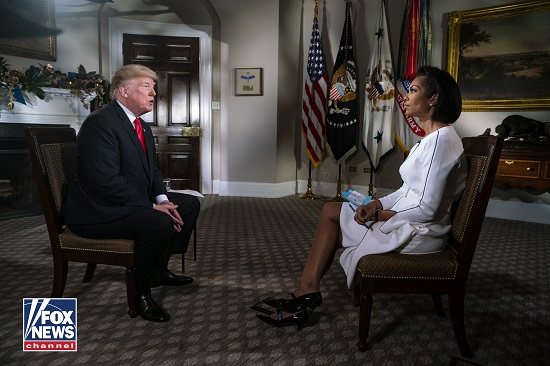 Faulkner broke some news in that first sit down.

The president claimed that his former lawyer/fixer Michael Cohen was responsible for any campaign finance law violations but also said Cohen “probably was not guilty” of even civil violations related to the payments to the two women.

“Those charges were just agreed to by him in order to embarrass the president and get a much reduced prison sentence, which he did,” Trump said during the interview.

Faulkner was lauded for pressing Trump on why exactly he hired Cohen in the first place. The president mentioned that Cohen had done a favor for him in the past. When Faulkner asked what exactly that favor was, Trump said Cohen was on a condo committee with Trump regarding the Trump World Tower, which stands across from the U.N. in New York. Cohen was “a very big supporter” of his and he seemed like a nice guy, per President Trump.

Faulkner later asked the president about his search for the next White House Chief of Staff.

Trump also talked extensively about trade and his relationship with China.

But the Fox News anchor was criticized for some of her questioning at the conclusion of what was a pretty lengthy interview. During the last couple minutes, she complimented the president on his energy, his midterm campaigning, and his general work ethic. She remarked that she hopes she’ll be able “to come back at some point,” and said, “God bless you and your family, Mr. President.”

FAULKNER:   All right, I’m being told I have to wrap with you, and I wanted to do a few rapid fire.  So, can I just do one?

FAULKNER:  What do you love about being president?

TRUMP: Oh no because – hey, the Paris Accord –

FAULKNER:  So when you get up in the morning, and you say, I get to go do this, what you love

TRUMP:  Let me tell you, the Paris Accord s not working out too well for Paris.  Take a look at what’s happened over there.

FAULKNER:  France is struggling on a whole (inaudible) —

FAULKNER:  Yes, you have such energy for this.

TRUMP:  Do I have a choice?

FAULKNER:  Well, yes you do, actually.  You do, not every president would have worked six and seven out on a campaign trail —

FAULKNER:  Some don’t.  Which you do.

TRUMP:  You know what, I like to say I work hard, but hopefully I work smart, because I know a lot of people, they work — you have to work smart too, and we’re doing great.  The country is doing great and we’re respected again.

FAULKNER:  All right, I’m being told we have to wrap, but I’m hoping to come back at some point.

TRUMP:  I would love that.

FAULKNER:  And you and I traded a lot of papers and it’s been a good conversation, thank you, sir.

TRUMP:  Thank you very much.

FAULKNER:  In the oval office a few moments ago, very fun, I got to see a little bit of things here.  So thank you, I appreciate it.

TRUMP:  Thank you, great having you.

FAULKNER:  God bless you and your family, Mr. President.

TRUMP:  Thank you very much.

This didn’t go over well with some in the media.

“What do you love about being President?”

“What do you love about being president?” — Harris Faulkner to Trump.

these chyrons are just…well, they’re something pic.twitter.com/8t5vJ09e4c

She adds, “You have such energy for this,” congratulates him for working hard.

“That was not an interview,” S.E. Cupp said on Brianna Keilar‘s 1 p.m. CNN program. “It was an infomercial allowing the president to provide his evidence. ‘See, look what this paper says, and look what this person says.’ To ask the president how he feels about his good approval numbers. I mean, I watched the whole interview. It wasn’t journalism. That was an infomercial.”

Not everyone was critical of Faulkner’s performance:

Great Interview @HARRISFAULKNER so proud of you