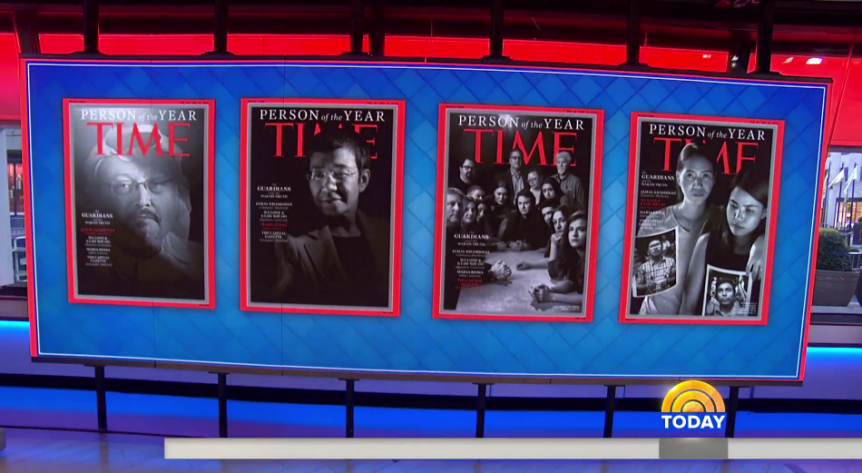 It’s been a choatic year for the political press, and Time magazine recognized that when making its decision about who to name its annual Person of the Year. They settled on a group,  –”The Guardians and the War on Truth” – led by the late Washington Post columnist Jamal Khashoggi, who was brutally murdered in October at the Saudi Consulate in Turkey.

Kashoggi was murdered due to his criticism of the Saudi crown prince Mohammed bin Salman.

The announcement was made Tuesday on NBC’s Today.

“It became clear that manipulation and the abuse of truth is really the common thread in so many of this year’s stories, from Russia, to Riyadh, to Silicon Valley,” Time editor in chief Edward Felsenthal told Today’s Savannah Guthrie and Hoda Kotb, live and in studio. “We chose to highlight four individuals and one group who have taken great risks in pursuit of greater truth, starting with Jamal Khashoggi.”

Felsenthal showed off four magazine covers featuring Khashoggi, the Capital Gazette team in Annapolis, Md., Maria Ressa, editor of a Philippine news website renowned for its critical coverage of its president’s controversially violent policies, and the wives of Wa Lone and Kyaw Soe Oo, the two Reuters journalists who were arrested in Myanmar while investigating a massacre of Rohingya Muslims.

The Capital Gazette is the paper targeted by a gunman who opened fire into the newsroom, killing four journalists and a sales assistant back in June.

This marks the first year Time has named someone who is no longer alive a Person of the Year, the magazine noted.

Editors named President Trump as this year’s runner up, citing “a crowning irony” to the president’s influence.

“His ultimate impact may be determined as much by the resistance he engenders as by the goals he pursues,” the magazine said.

In 2017, Time’s Person of the Year was the Silence Breakers, the men and women who spoke out about sexual harassment and assault across a number of different industries.