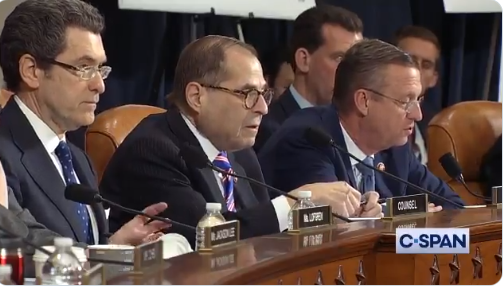 Here’s what we can expect from the House Judiciary Committee’s first public hearing in the Pres. Trump impeachment effort, being held today.

The Democrats have invited three constitutional scholars to testify in front of the committee, each of whom will say that Pres. Trump committed impeachable offenses.

The Republicans were permitted to invite one constitutional law scholar of their own, who will argue that the case against Pres. Trump is premature, during this first formal public hearing.

George Washington Law professor Jonathan Turley is the Republicans’ witness. He also happens to be a CBS News legal analyst, and he, calmly, made sure to note in his opening statement that he did not vote for Pres. Trump before stating why he believes there is not enough “there, there” for impeachment.

Fox News senior judicial analyst Judge Andrew Napolitano remarked during the pre-hearing coverage that if he was a member of Congress, he would vote to impeach the president.

Well I believe that the Democrats have credibly argued that he [President Trump] committed impeachable offenses. The easiest one, because this existed in Andrew Johnson, Richard Nixon, and Bill Clinton—is obstruction of Congress. So by directing his subordinates to refuse to comply with the lawfully-issued subpoenas—whether it’s for testimony or for documents—that’s an impeachable offense. We know that from history. Every time the House of Representatives has looked at that, with respect to a President, it has found it to be impeachable. On that, reasonable minds cannot disagree without rejecting history, rejecting Constitutional norms.”

One noteworthy moment during the early part of the proceedings took place when ranking member Doug Collins (R-GA) seemed to insinuate that the legal scholars were not present to discuss facts.  Prof. Karlan didn’t appreciate that, per below.

Pamela Karlan to Doug Collins: “I would like to say to you, sir that I read transcripts of every one of the witnesses…I would not speak about these things without reviewing the facts. I’m insulted by the suggestion that as a law prof I don’t care about those facts.”

Prof. Karlan when on to claim that the facts show the president abused his power.

“The point is why are you talking to the three and not the other?” said Wallace. “Because the Democrats who have the majority called three Democratic pro-Trump-impeachment law professors, and they wanted to focus on them, and they didn’t want to hear anything from Jonathan Turley, who is the one lawyer who’s been called by the Republicans.”